Pascal (Ethan Peck), a former test subject, is the killer. Having previously reacted well to the drug, he was given more, until he began seeing all strands of time simultaneously. He suffered a psychotic break, and now is killing everyone connected to the study of the drug, including the test subjects, to erase every trace of it from the world.

Anna (Virginia Gardner) realizes Pascal is not technically seeing the future, but what is akin to self-fulfilling prophecies. To get an edge of his tolerance, Anna takes a large dose. Den (Nathan Kress) confronts him only to be easily defeated. Anna shows up and they drown Pascal, a fate Den once held. However, Pascal sees that scenario as well; in response, he stabs Den and throws him in the pool. Anna saves him and drags him out.

Meanwhile, Dr. Jerrems (William Mapother) is confronted by his boss Dr. Layton (Mark Rolston) in the safe room he had hid in. Jerrems realizes too late the liquid dripping into the room all night was flammable as Layton drops his cigar, incinerating them both, just as Pascal predicted. Anna drags the wounded Den outside into the morning, as police sirens wail in the distance. Pascal is nearby, but spares them, given he got his revenge on Layton and Jerrems. 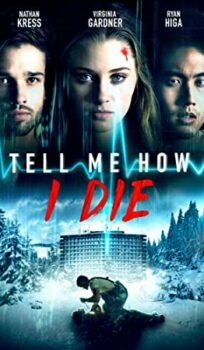