A suburban dad is mounting a large satellite dish in the backyard.  At the same time, on a distant planet, an alien is disposing of a killer beast in a machine that will transform it’s  matter into pure energy and beam it to the far end of the galaxy.    The satellite dish is perfectly aligned with the energy beam. The monster is converted back to matter and emerges from a television.  The monster consumes  people but can keep their heads as puppets to communicate with other people.  It kills the grandfather. The son knows what is going on and tries to warn people but nobody believes him.  It kills the parents and another couple who are over visiting them.   The monster can transmit itself electronically from one TV in the house to another.

The son, daughter and her punk rock boyfriend communicate with the monster.  They think they have tamed it.   Hoping to become rich displaying the monster on TV, they contact Medusa (an Elvira- like horror movie hostess).   All through the movie, the original alien has been appearing on TV trying to warn earth about the danger of the monster.  The family think it is a foreign language science-fiction movie.  That alien now arrives at the house to dispose of the monster and save earth. Medusa shows up sees that alien, and kills him.  The monster kills the son, the daughter, the boyfriend and Medusa.

The movie ends with the monster in the back of Medusa’s limo, using her puppet head to tell her driver to take her to the TV station.   Presumably, the monster will use her TV show to gain access to TVs all over and kill many more. 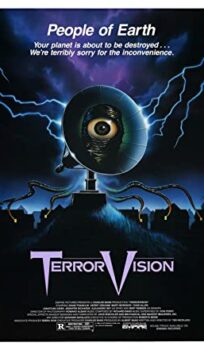