Two of Carol’s (Jane Alexander’s) children, Mary Liz (Roxana Zal) -the eldest- and Scotty (Lukas Haas) -the youngest-, die from radiation sickness; Larry (Mico Olmos), the young boy they had given shelter to, also dies.  One night, while looking for batteries, Carol tampers with the answering machine, thus activating it; a third message from her husband Tom (William Devane) is heard, in which he says that he would have to stay in San Francisco.  It is then when she realizes he was meant to be doomed that day, and never return again.

In the end, most of the people have died and the town itself has become a desolated wasteland.  Carol, her middle son Brad (Ross Harris), and Hiroshi (Gerry Murillo), the Japanese boy with Down’s Syndrome, are some of the very few left.  Carol decides to abandon the house, take the car and leave town.  She starts it to see the battery still works; however, she feels ill and fears not to be able to do the trip.

The three of them share crackers topped with peanut butter and a lit candle, like celebrating.  Carol asks them to make a wish; when Brad asks what to wish for, she says they should wish for the joy of having kept fighting and prevailing, to be able to survive.   They blow the candles; the last shot is of a flashback of all the family together.

The viewer is left to decide whether they left town together, or if they just stayed to meet an inevitable fate. 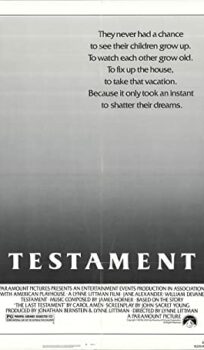