POOPER:
Leatherface is still alive, living peacefully in Harlow. When wealthy young people buy up the town and evict his adopted mother (leading her to die from the shock), Leatherface dons a new mask and chainsaw and goes on a killing spree. The only survivor from the original film – Sally Hardesty – returns to fight him, but Leatherface chainsaws her through the gut. Although sisters Lila and Mel appear to kill Leatherface, he survives their attack and decapitates Mel as Lila escapes in a self-driving car.

LONG ENDING:
A young social media influencer named Dante (Jacob Latimore) buys a small Texan town called Harlow at a bankruptcy sale. He is holding an auction for wealthy young investors, hoping to turn the town into a modernized paradise. He brings his girlfriend Ruth (Nell Hudson), friend Melody “Mel” (Sarah Yarkin), and Mel’s sister Lila (Elsie Fisher) with him. Lila is recovering from being the only survivor of a mass school shooting.

In the town, they find an old woman who claims to still be the rightful owner of the town’s orphanage. She lives with a large man – her last remaining orphan. Dante has the woman evicted, which causes her to suffer a medical episode. Her “son” accompanies her in the ambulance, where the woman dies (it’s later revealed she was indeed the rightful owner of the orphanage). In his grief, the man slaughters everyone in the ambulance (including Ruth). He then cuts off the woman’s face to wear as a mask, revealing himself as the psychotic killer Leatherface (Mark Burnham).

Leatherface returns to Harlow and kills Dante, a local contractor named Richter, and the investors. Leatherface pursues Lila and Mel (even though Mel apologizes for what happened to the orphanage owner). Before he can kill them, Leatherface is confronted by a woman named Sally Hardesty (Olwen Fouéré). Sally was the only survivor of the attack by Leatherface and his family from the original film. Though she wounds Leatherface and causes him to flee into an abandoned theater, he delivers a fatal blow to Sally by chainsawing her in the gut. Before Sally dies, she convinces Lila to finish Leatherface off because if she doesn’t, he will “haunt” her forever.

Lila and Mel confront Leatherface and seemingly kill him after shooting him twice, slashing him in the face and neck with his own chainsaw, and drowning him. The sisters get into a self-driving car to leave the town when Leatherface reappears and drags Mel out of the moving car. As Lila watches on helplessly, Leatherface decapitates Mel before dancing with his chainsaw and Mel’s severed head.

In a post-credit scene: Leatherface is seen returning to his old family home. 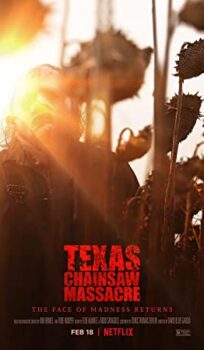