In a small French-Canadian town, someone is sending anonymous letters with accusations against other townspeople.  The town has a new young handsome doctor, Dr. Pearson (Michael Rennie), and an elderly Dr. Laurent (Charles Boyer) with a beautiful young wife.

Initially, the accusations are all against Dr. Pearson and accuse him of having an affair with Laurent’s wife.  The letters demand he leave town.  Later letters level accusations against others.

A paranoid soldier recuperating in the hospital kills himself after getting a letter falsely claiming he has terminal cancer.  The police can not find who is writing the letters.  The townspeople begin to turn on each other.

When Mrs. Laurent tells people the accusations of an affair are true, Dr. Pearson knows this is a lie. He goes to confront her. He recognizes her handwriting from the letters.  She confesses to writing them but states she was coerced by her husband.   Dr. Laurent was jealous of his younger wife and convinced she was interested in Pearson.  Laurent wanted to drive Pearson out of town.  Pearson goes with the police to confront Laurent.  When they get there, they find Laurent dead, in the middle of writing another of the letters.  His throat was slashed by the mother of the dead soldier, in revenge for her son’s death. 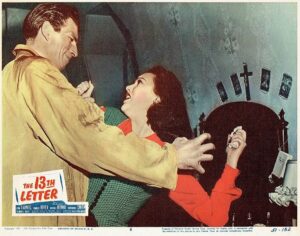 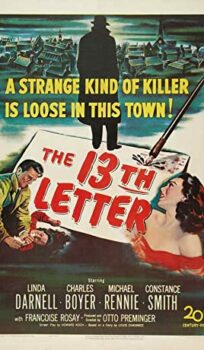