Colonel Vosch (Live Schreiber) is one of the alien “Others.” The fifth wave was the Others’ plan for eliminating the remaining human on Earth by tricking them into killing each other. The goggles he had given the kids made them see other humans as aliens, so that they’d kill other humans on sight.

Ben “Zombie” Parish (Nick Robinson) figures out the plot. He tells his friends to shoot him and run away. He will go back to Vosch’s military base and pretend to have been wounded in battle. He will tell Vosch that his friend are all dead.

Cassie (Chlose Grace Moretz) comes to the military base to rescue her brother Sam. She kills Sgt. Reznik (Maria Bello).  Her “friend” Evan, an Other spy who has retained some humanity, helps her by setting off explosions at the base. This allows Cassie to find Ben and her little brother Sam. They escape from the base before it is destroyed, and begin contemplating how to continue fighting the Others. 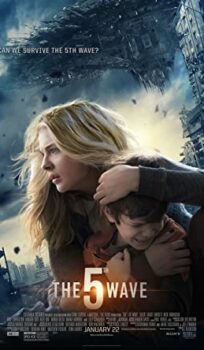