The Accountant (Ben Affleck) serves criminals around the world, but due to the dangerous nature of his work, he frequently changes his identity.

He is a high-functioning autistic, so he is excellent with numbers and data and other specialized training he’s received from his tough-love father, including weapons and fight training. He struggles with social interactions, but he still tries to help people.

With two Treasury Department investigators on his trail (J.K. Simmons and Cynthia Addai-Robinson), he takes on a seemingly safe job for a robotics company with the help of an in-house accountant (Anna Kendrick). He uncovers deep corruption, but the CEO (John Lithgow) has hired an assassin, who we later find out is the Accountant’s brother (Jon Bernthal).

The Accountant saves the in-house accountant, reunites with his brother, and kills the CEO. 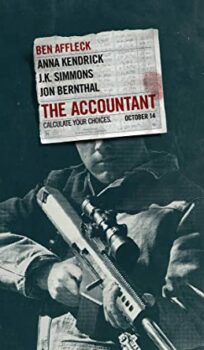