Pooper :
It turns out that Gordon really is Uncle Fester suffering from amnesia. Fester helps Gomez defeat Tully and Abigail. The family reunites and Morticia tells Gomez she is pregnant!

Long Ending:
The Addams family are close-knit, unified by their eccentric/occult behavior. The family includes the passionately married and sadomasochistic Gomez (Raul Julia) and Morticia (Anjelica Huston), the witch-like Granny (Judith Malina), and morbid siblings Wednesday (Christina Ricci) and Pugsley (Jimmy Workman). They are incredibly wealthy, with Gomez keeping piles of gold dubloons in his hidden vault. They also live with their zombified butler Lurch and a dismembered, sentient hand named “Thing” (Christopher Hart). The family is incomplete, because over twenty years ago, Gomez had a falling out with his brother Fester when they pursued the same woman. Gomez holds a seance every year to try and and contact Fester, whom he believes is dead.

The Addams’ accountant Tully (Dan Hedaya) and his prim and proper wife Margaret are near bankruptcy. Even worse, Tully owes a sizable sum to his loan shark, Abigail Craven. One night, Abigail brings her thuggish son Gordon (Christopher Lloyd) to Tully’s office to shake him down for the money. While being manhandled, Tully realizes that Gordon is a spitting image of Fester. The three then devise a plot to have Gordon moonlight as Fester, infiltrate the Addams house, and discover the location of the secret vault. During Gomez’s seance, Gordon (now dressed as Fester) appears and “reunites” with the family.

Fester claims that he journeyed to the Bermuda Triangle and was washed overboard. He was rescued after being caught in a tuna net by psychologist Greta Pinder-Schloss (Abigail Craven in disguise), but had suffered amnesia as a result of the experience. Although the family becomes suspicious of Fester’s identity due to his inability to remember his past, Dr. Pinder-Schloss manages to help him keep up the ruse. Gomez soon shows Fester the vault, although Fester is unable to access it on his own given the elaborate set of booby-traps that safeguard it.

As time goes on, Gordon becomes more immersed in the Fester role and truly bonds with the family. He shares their love for all things morbid and spooky. Unlike Abigail, the Addams show him true affection. Meanwhile, Abigail and Tully get more impatient with their inability to get into the vault and devise another plan to get at the Addams fortune. Abigail manages to convince Gordon to have the Addams family evicted and disenfranchised as Fester (the older brother) was actually the sole inheritor of the Addams estate. Though Wednesday has discovered that Fester and Pinder-Schmidt are con-artists, the courts side with “Fester” as the judge had been a victim of one of Gomez’s constant neighborhood pranks.

Morticia (followed by Thing) returns to the Addams house in an attempt to reason with Gordon/Fester. Instead, she is captured by Abigail and Tully who unsuccessfully try to torture her into telling them how to bypass the vault’s security measures. Thing alerts Gomez to the fact that Morticia has been captured. Gomez tries to rescue her, but himself is captured. During the rescue attempt,however, Abigail reveals that Gordon is not actually her son. No longer feeling obligated to her, Gordon ends up freeing Morticia and permanently ejecting Abigail and Tully from the Addams household (and the two are possibly buried alive by Wednesday and Pugsley). Gordon is electrocuted in the struggle.

The film jumps ahead to show that the electrocution actually helped Gordon to realize that he actually is Fester. He had, in fact, been lost in the Bermuda Triangle and suffered amnesia before being caught in a tuna net and being taken advantage of by Abigail. He now lives happily with his family and the incident also allows him to power light bulbs by simply sticking them in his mouth. They are also joined by the Tully’s ex-wife Margaret who has fallen in love with the Addams’ cousin Itt (a creature covered from head to toe in hair). Margaret has abandoned her prim and proper ways, claiming that the Addams are the best thing to ever happen to her. As Morticia and Gomez watch Fester playing with the rest of the family, Morticia reveals to Gomez that she is pregnant. Gomez is thrilled and he passionately kisses his wife as the credits roll. 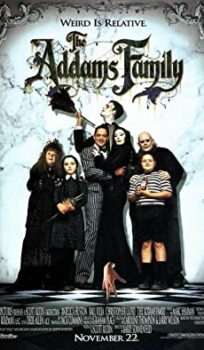