POOPER:
Gwen and Peter kill Electro by overpowering him with energy. Harry Osborne, in full green goblin form, kidnaps Gwen and takes her to a clock tower. After a fight, Gwen hangs on a web that is about to be severed by the rotating gears of the clock. As Spider-Man subdues the green goblin, the web snaps. As she falls Spider-Man jumps after her. Just as she’s about to hit the ground he catches her, but the whiplash of her neck happens and her head hits the floor. She is killed instantly, leaving Peter sobbing by her corpse.

EXTENDED VERSION:
Harry (Dane DeHaan) is set up by Oscorp corporate lawyer Donald Menken (Colm Feore) to look as though he tried to cover up the death of Max Dillon/Electro (Jamie Foxx).

Harry frees Electro in an effort to take back Oscorp.

Peter (Andrew Garfield) discovers his father’s secret laboratory at the abandoned Roosevelt track (it had been used to secretly transport president Roosevelt during the war).

Peter finds out that his father’s experiments at Oscorp involved radiating human DNA in the spiders in an effort to find a way for healthy cells to reproduce within the body. What no one else knew was that the DNA was his own. The project was being funded privately by Norman Osborn (Chris Cooper) to find a cure for his own genetic disease, but Richard discovered that he also planned to ultimately use the research for biological weapons development, and decided to shut the project down. This unfortunately meant that he and his wife needed to flee New York and leave Peter with Richard’s older brother Ben and wife May. Now knowing that his father is not a traitor, Peter returns to the streets of New York.
After freeing Electro, Harry forces Menken, at gunpoint, to take him to the secret weapons wing, and injects himself with the serum that supposedly would cure him, but really is meant to sync his body with the suit attached to the Goblin Glider.

Gwen (Emma Stone) helps Peter to magnetize his web shooters so that Electro won’t zap them. It works. Peter tries to keep Gwen away from the action, even though she wants to help like she did in his conflict with the Lizard.

Spider-Man tracks down Electro to the Oscorpower facility at Ravencroft. Gwen follows him and stays to help against his insistence that she shouldn’t be there. Gwen tells him that if he distracts Electro, she can restart the power grid. Spider-Man leads Electro to the main power grid and attaches multiple webs to the conductors in an effort to overload Electro once he starts releasing massive power. Spider-Man signals Gwen to restart the grid, and as she does, Electro’s power goes into overdrive, the city becomes repowered, and Electro dissipates.

It’s not over yet. Harry swoops in as the Goblin, and immediately figures out that Spider-Man is Peter. Harry grabs Gwen and flies her to the top of the clock tower. Spider-Man does not engage him, and simply asks that he let Gwen go. Harry does, and she falls, to be saved several times by Spider-Man, but for each save, Harry attacks again. Spider-Man finally wraps a web around Harry’s neck and ties him to a cog, which finally subdues him, but also causes Gwen to fall.

Spider-Man shoots a carefully coordinated web shot to catch Gwen, but in doing so, he breaks her neck, and she dies.

Peter spends the next 5 months in seclusion, heartbroken over his loss. The Man with the Hat (who I am saying is the Chameleon, which would fit in with the Sinister Six plot that seems to be developing) visits Harry in prison, who tells him that it’s time to move forward. He gives the Rhino suit to Aleksei Sytsevich (Paul Giamatti).

While rampaging through the city, the Rhino has a standoff with a little boy dressed in a Spider-Man suit. Suddenly, the real thing shows up, and the fight goes into the credits. 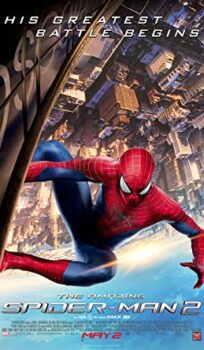