I know this is just going to open the door to you folks who occasionally ask me to post “Magnolia,” but this is really a better film anyway. Here goes…

Sally (Jennifer Jason Leigh), searching for the missing dog Otis, comes upon Joe (Alan Cumming) in a passionate embrace with neighbor Monica (Mina Badie). Her anger is quickly forgotten in the search for Otis, only to be replaced by Joe’s when Sally reveals that she had an abortion two weeks prior to the party. Panes (Michael Panes) and Skye (Gwyneth Paltrow), searching a different part of the canyon, start to really hit it off. Meanwhile, back at the house, Mac (John C. Reilly) nearly drowns while “filming” Clair (Jane Adams) and Judy’s (Parker Posey’s) underwater ballet, but is rescued and revived by Jerry (John Benjamin Hickey). Sally and Joe return (sans Otis) to the news that Joe’s sister Lucy has died of an overdose in London. Joe tries to deal with his grief and guilt (in retrospect, the answering machine messages he’d been ignoring are obviously suicidal in tone); Sally tries to deal with her crumbling career, her conflicts over having children and her anger over Gina (Jennifer Beals) attempting to assume her role; Cal (Kevin Kline) and Sophia (Phoebe Cates) gather up their sleeping children and go home; Skye and Panes sneak off for sex in the master bedroom. Otis returns on his own. The film closes as the sun rises on a new day chock full of unresolved issues.

Did I leave out anybody besides Ryan (Denis O’Hare)? 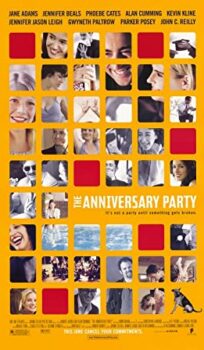