The movie is narrated by Enzo (voice of Kevin Costner), Denny’s (Milo Ventimiglia) beloved and loyal dog. Denny is a race car driver and instructor who adopts Enzo as a puppy and takes him to the racetrack at every opportunity. When Denny meets, falls in love and marries Eve (Amanda Seyfried), Enzo feels some jealousy but when they eventually have a daughter named Zoe, Enzo loves her so much that he accepts Eve. When Zoe is about 7 years old, Enzo detects an odd smell coming from Eve, who has been experiencing headaches for weeks. Eve is diagnosed with a brain tumor after she collapses while hiking with Enzo. She undergoes surgery and chemotherapy and is in the hospital for weeks. When Eve is eventually released from the hospital, her parents Maxwell and Trish, whom Enzo refers to as “the twins”, encourage Denny to have Eve and Zoe live with them. Maxwell disapproves of Denny and his highly dangerous profession and feels Denny isn’t fit to care for his wife and daughter.

Eve dies one night as Enzo watches over here and immediately following the funeral, Maxwell and Trish tell Denny they are suing him for legal custody of Zoe. Things get heated between Denny and Maxwell, and Maxwell falls into a stone wall when Denny frustratingly brushes him off. Denny is then arrested for assault and is forbidden to see Zoe for 90 days. During this time, Zoe believes her father is racing in Europe and Enzo is staying with a friend. Enzo visits her a few times at Maxwell and Trish’s house, and even goes out of his way to soil their carpet as revenge for how poorly they are treating Denny.

Eve’s parents try to offer terms to Denny where he can have visitation rights to Zoe while they retain soul custody, but Enzo grabs and destroys the legal documents agreeing to this. Denny takes it as a sign to fight for his daughter and they go to trial. While Trish is on the stand and asked to give her account of the alleged assault, she speaks the truth saying that she never actually witnessed it. The judge then dismisses the case, and Denny, Zoe and Enzo are reunited.

By now, Enzo is over 10 years old and has slowed down considerable due to an unfortunate car accident in which he was hit while jogging with Denny. It is clear Enzo is dying and he narrates that he is ready to die and move onto his next life where he is confident that he’s learned enough to be human. Denny surprises Enzo by taking him around on the racetrack in an open top car and as they speed through the turns, Enzo is the happiest he has ever been.

Flash forward 8 years and Denny and Zoe have moved to Italy where Denny is a driver for Ferrari. He is introduced to a young, 8-year old fan who’s name is Enzo and Denny feels a connection with him and says he reminds him of “an old friend”. 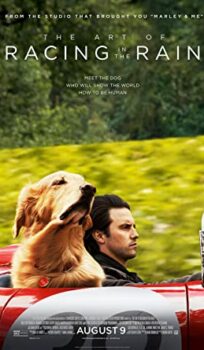