Distraught at being now known as nothing but a has-been, in the rise of talkies, silent film star George Valentin (Jean Dujardin) burns all his old movies. He nearly dies in the fire, but his trusty Jack Russell Terrier manages to fetch help in time to save him.  When rising film star, and former co-star, Peppy Miller (Bérénice Bejo) finds out about the fire, she visits George in the hospital and finds out that he saved one of his films – the one they starred in together.

Peppy takes George to her house to care for him and convinces studio head Al Zimmer (John Goodman) to give George the chance at a comeback in her next film.  George becomes distraught after he finds his old belongings in Peppy’s house (she bought them in an auction) and he runs off to his house and attempts to commit suicide.  Peppy arrives just in time to stop him and George explains that he is afraid that people would not want to hear his voice.  Peppy responds that they should try to do something other than talking – dancing (like they did together when they first met).  George and Peppy and then seen tap dancing (with sound) for Zimmer, who loves it and casts George in the film.  In the final moments, during the filming of George’s comeback, the film switches completely to sound, signifying that George has finally accepted the changing times. 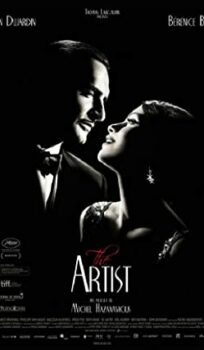