POOPER
The game between the Bears and Japan is cancelled due to a bench-clearing brawl instigated by the three ringers Louis brought in to play with the Bears, and Japanese manager Shimizu fears he’ll lose his job due to the disgrace of having his team involved in a fight on the field. While Lazar and Shimizu are commiserating over drinks, the teams (minus the three ringers) continue the game in a park. The network wants the teams to return to the stadium to continue the game, but Lazar declines to do so and announces he’s done being their promoter. Lazar then proposes to the Japanese manager that the teams have a rematch…in Cuba!

LONG VERSION
The Japanese Little League champions have challenged any American Little League team to a match, but no one has accepted the offer. The Bears, back home following their victory over the Toros in Breaking Training, see the Japanese call the Americans cowards on national TV and decide they will accept their offer. With no money or manager (Kelly’s father stayed in Texas), the team goes on local television to raise funds for the trip. Local promoter/con man Marvin Lazar (Tony Curtis) sees the Bears on TV and comes up with a plan. He approaches his partner Louis (Lonny Chapman) and asks him for $10,000 to pay for the trip, and in return he’ll get 25% of the profits generated by the game. He refuses, but Lazar still meets with the Bears and tells them he has the money and he’ll also be their manager, even though he knows very little about baseball. Now in Tokyo, the Bears are greeted by the Japanese team at the airport, but the Bears think they are being made fun of and start a fight with them on the tarmac.

Despite the animosity, the teams agree to play an exhibition game, during which Lazar is trying to find endorsement deals for the Bears. Even though star player Kelly Leak (Jackie Earle Haley) hits a home run on the first pitch of the game, the rest of the team plays terribly and they give up 10 runs in the first inning. Realizing they’ve been had, the media covering the game leave, and Lazar is told nobody back home wants to see an American team lose. On their way back to the hotel, Kelly sees a beautiful Japanese girl and begins to follow her. He tries to talk to her, then he realizes that she doesn’t speak English. After purchasing a Japanese-English dictionary, he tries again, and he is able to convince her to go to dinner with him. He also learns her name is Arika (Hatsune Ishihara). Meanwhile, Lazar’s lies about the money begin to catch up to him when the hotel cuts up his credit cards and demands he pay in cash, which he doesn’t have. The team then figures out that Lazar lied to them about setting up the games or television coverage and demand he do something about it.

Lazar uses his connections to arrange a match against Japanese wrestling star Antonio Inoki (playing himself). The network covering the match rejects Lazar’s opponent, so he decides to fight Inoki himself. As Lazar is getting thrown around the ring, one of the Bears goes in and starts to fight Inoki, with the rest of the team joining in. With their help, Lazar wins the match, and earns enough money to pay for the hotel and one game against the Japanese. The media coverage of the match gives the Bears the publicity they need to convince an American television network to broadcast the game. While the two teams (who are starting to get along better) travel to the city that will host the game, Kelly stays behind to get to know Arika better, despite the language barrier. She later introduces Kelly to her father, but he immediately disapproves of the American and forbids his daughter from seeing him again. While that is happening, Lazar learns that the Japanese manager Shimizu (Tomisaburo Wakayama) is not happy with the Americans looking at this game as just a way to make money. Through a translator, Lazar admits to Shimizu that he can be obnoxious, but if his plan works, then this will benefit baseball in Japan as well. This convinces Shimizu to go through with Lazar’s latest stunt, to have the Japanese team appear on a talent show. The team wins the contest, and as a result they earn an endorsement deal with a bat company.

Kelly catches up with the team as Lazar announces to them that they finally have an endorsement deal and they have paid for the Bears to have new uniforms, even though they don’t like them. Later, Lazar’s partner Louis shows up, and he tells him that he has brought with him three players that will help the team win. He will also place a large bet for Lazar on the Bears, who are 25-to-1 underdogs, that will allow him to get rich. Lazar then introduces the three ringers to the rest of the team, but they say they don’t need them to win. Game day finally arrives, and Louis orders Lazar to start all three of his players and have them bat at the top of the order. The single-handedly give the Bears an early lead, but the substandard play of the rest of the team allows the Japanese to tie it up. Between innings, Louis orders his players to start intimidating the Japanese players, in hopes that will get them to play badly. They start to play aggressively, which bothers Lazar, but the rest of the team (still mad at him for bringing in the ringers) doesn’t care. Then, one of the ringers attempts to injure one of the Japanese players, which leads to pushing and shoving. The Bears stay in the dugout, but when Kelly gets dragged into the fight, the Bears emerge and defend him. The Japanese players then get involved, as does several spectators, and a brawl begins.

Once the fight is broken up, Lazar sees the Japanese team has left the stadium and learns the game has been cancelled. A network executive approaches Lazar and tells him that he has until 4:00 to get the game restarted or else he’ll be sued for breach of contract. Then Louis approaches him and says all deals are off and he is taking his three players back home. Lazar then goes to the hotel and finds Shimizu. He tells Lazar that the Japanese Little League Association ordered the game cancelled due to the disgrace of having his team involved in a fight on the field, and he fears he will lose his job. As they commiserate over drinks, they see that the two teams have continued the game in a nearby park. They join their teams just as Kelly is coming to bat. He’s still moping over what happened with Arika, when she suddenly appears. Now invigorated, Kelly promptly hits a home run, then jumps into her arms and they kiss. At this time, the network executive arrives at the park and demands that the teams return to the stadium to finish the game. Lazar refuses, claiming the game is over and he is done being their promoter. The movie ends with both teams leaving the field while Lazar approaches Shimizu with the idea of a rematch…in Cuba! 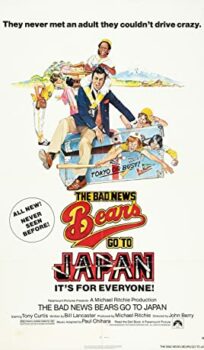