Carl (Adam Roarke) returns home early from his business trip and sees the aftermath of a big party Ducky (Jeana Tomasina) and Ginger (Val Kline) threw there, so he has a chat with Sarah (Debra Blee) and tells her that he wants Ducky and Ginger gone by tomorrow. Having overheard this chat, the two girls decide to seduce him so they can stay. Meanwhile, the marijuana smuggler Captain Jack (Paul E. Richards) is informed by one of his men that his nemesis, U.S. Navy Captain Blye (Herb Braha), is in pursuit of him and will likely catch him, so he orders his crew to dump all six trash bags full of his cargo into the ocean to avoid arrest.

The next day, after witnessing Ducky and Ginger putting the moves on Carl and him putting up virtually no resistance, the nosy Mrs. Blinker (Mary Jo Catlett) calls up Carl’s stuck-up fiancée Julie (Fern Fitzgerald) and tells her that Carl is being unfaithful to her. Later on, the bags of weed wash ashore on the beach behind Carl’s house, and Ducky and Ginger find them. They bring them in and show them to Sarah, but when she tells them that they are going to get busted for possessing all of this, Ginger calls her a “fifty-year-old teenager” because she can never seem to loosen up.

At another party that night at the house, Sarah takes Ginger’s words to heart and does loosen up, but is rather reckless about it and almost alienates her love interest Scott (James Daughton). Julie shows up and eventually finds Carl in the sauna with Ducky and Ginger, and after throwing a few insults at them all, she tells Carl that their engagement is off and storms out. Carl soon decides that he is better off without her and resumes his fun with the girls. Julie soon gets charmed by Officer Jay (Channing Clarkson) and ends up fooling around with him.

Having tracked down the dumped marijuana to Carl’s house, Captain Blye and his men arrive on the beach outside with plans to find and destroy all of it. They go into the house and force all of the partygoers down to the beach by the bonfire there, and they find all of the weed and burn it on the fire. However, as Blye starts preaching about the dangers of the drug, he and his men inhale the smoke and get high. Mrs. Blinker and her husband then appear and get high off the smoke, too, and they all join in on the party. Sarah and Scott go off to a private spot and have sex. Captain Jack and his men then come in nearby in the hopes of reclaiming their cargo and selling it in addition to a new load they are carrying, but when one of the men informs Jack that Blye and his crew are on the beach, Jack decides to give up on weed smuggling altogether and has his men dump the new load into the sea. Ducky then accidentally sets off some fireworks, and Blye and his crew believe that they are being attacked and retreat back to their ship.

The next morning, the news bags of weed wash up in the same spot as the last load, guaranteeing more wild parties to come. 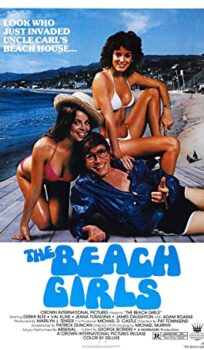