Pooper:
The Belchers foil Grover’s plans to destroy the wharf and kill his Fischoeder cousins. Grateful to the Belchers for saving his life, Calvin Fischoeder gives the Belchers a break on their rent (allowing them to pay their bank loan for the month) and lets Gene’s band perform at the wharf. Louise develops self-confidence and Tina successfully asks Jimmy Jr. to be her summer boyfriend.

Long Ending:
The film opens as a carnival worker (a “carnie”) is murdered several years prior by an unseen assailant in the town’s wharf.

In the present The Belcher family owns a struggling burger restaurant (named Bob’s Burgers) a few blocks from the wharf. As summer approaches, each of the family members are stressed. Parents Bob (voiced by H. Jon Benjamin) and Linda (voiced by John Roberts) have an upcoming loan payment that they are unable to pay, which would lead to the failure of their business. Oldest daughter Tina (voiced by Dan Mintz) can’t seem to ask her crush, Jimmy Jr. (voiced by H. Jon Benjamin), to be her summer boyfriend. Middle child Gene (voiced by Eugene Mirman) wants to perform with his band at the nearby wharf, but is worried that nobody will like his unique sound. And youngest daughter Louise (voiced by Kristen Schaal) is frustrated that her classmates view her as a cowardly baby since she still wears a bunny-eared hat Linda made her during preschool and won’t try a dangerous trick on the monkeybars at recess.

Things go from bad to worse when a massive sinkhole opens up right in front of Bob’s Burgers, preventing the summer crowds from eating there. The loan officer also refuses to extend their loan deadline. That night, Louise falls into the sinkhole while initially trying to climb into it to prove her bravery. Therein, she finds the corpse of the carnie killed at the beginning of the film. Although this makes Louise a minor celebrity, her classmates still taunt her. Bob’s Burgers is further cordoned off as a crime scene. Bob appeals to his landlord (and the owner of the nearby wharf amusement park) Calvin Fischoeder (voiced by Kevin Kline) for an extension on the rent so he can pay the loan. Although Calvin considers it, Calvin’s greedy brother Felix (voiced by Zach Galifianakis) and uptight cousin-attorney Grover (voiced by David Wain) vote against it.

Louise decides to fully prove her bravery (and save the family restaurant) by investigating the crime. She conscripts Gene and Tina into helping her. Meanwhile, the Belchers’ best customer/friend Teddy (voiced by Larry Murphy) builds them a mobile food cart so they can sneak into the wharf and sell burgers there. The police eventually arrest Calvin for the murder, though the kids theorize that Felix is the true murderer and is framing Calvin for the carnie’s murder so he can get the wharf. Tina also struggles to decide if she really does want to date Jimmy Jr. Meanwhile, Bob, Linda, and Teddy are chased from the wharf when they accidentally destroy a monument made for the dead carnie.

Eventually, the Belchers all converge in a secret lair underneath one of the wharf rides that the Fischoeders use as a private club. Felix and Calvin (whose out on bail) both claim to be innocent, but reveal plans to escape on an animatronic submarine since neither can prove their innocence. However, Louise is able to piece together that Grover is in fact the killer. Grover holds them all at gunpoint and admits to the crime. He says that he’s tired of being treated like garbage by Calvin and Felix and killed the carnie years ago to frame them both. However, the dirt he hid the body in was used to fill in the street in front of Bob’s Burgers so he had to abandon his plan until the sinkhole surfaced and exposed the corpse. Now that the police already think Calvin and/or Felix are guilty, he will force them into sea in the submarine (which he notes will obviously sink since it isn’t real) and set the wharf on fire (in which the Belchers will perish). With his cousins and all witnesses dead (and the amusement park burned down), Grover will inherit the wharf and convert it into a mega tourist trap.

The Belchers are able to escape their bonds and Louise is specifically able to stop the bomb Grover set from going off. An enraged Grover chases the Belchers in some old go-karts and Grover eventually crashes the Belchers’ kart into the sinkhole in front of their restaurant and pushes dirt on top of them. Bob manages to crack an underground waterpipe and the resulting geyser frees the kart from the hole and notifies the police. Grover is arrested and Felix and Calvin are saved from drowning.

Thanks to their bravery, Calvin and Felix agree to let the Belchers go rent-free for the near future, meaning they can pay off that month’s loan. Tina decides she really does want to date Jimmy Jr. and successfully asks him out. Gene’s band is allowed to play at the wharf (and Felix and Calvin even accompany them). And Louise, now brimming with confidence, is able to impress her schoolmates and even take off her bunny-eared hat (even though she still prefers to wear it). 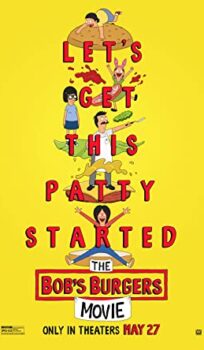