Connor (Sean Patrick Flanery) and Murphy (Norman Reedus) kill most of South Boston’s crime figures. Their friend Rocco gives the brothers the adress to Don Yakevetta’s house. The three are caught and tortured. Yakevetta kills Rocco and leaves the brothers to watch Rocco die slowly. Agent Smecker(Willem DaFoe) catches Yakevetta’s men off-guard by dressing in a woman’s costume and luring a goon for sex. Smecker kills three goons before being knocked out by Il Duce. Smecker ahs been aware of the brother’s action but does not arrest them because they are doing good in the world. Il Duce is found to be the brother’s father.

Three months later, Yakevetta stands trial. Connor, Murphy and Il Duce know Yakevetta will walk and so does the police force. Policemen allow the three in with guns. They walk into the courtroom and exposes themselves. The three blow Yakevetta away, execution style. Later, the three are dubbed “The Saints”. Il Duce tells Connor and Murphy that the killing won’t end and this is just the begining. 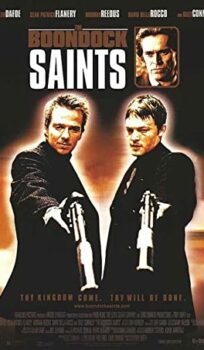