SHORT VERSION:
While hanging out with Luke at their shack one night, Kyle, Eric, and Brad find out at random about how he is a wanted cop killer, so he holds Eric hostage and demands for the others to find him a getaway car, and orders them to not call the cops or he’ll kill Eric.

They attempt to steal Kyle’s brother Jake’s car, but Jake catches them in the act, and the boys crash it and run away. Jake comes to the shack the next morning to burn it down in revenge, but he encounters Luke and gets non-fatally shot by him. When the boys come by later, Luke lets Eric go and tells all three of them to find him a car, and he will let Jake bleed until he gets one.

The boys instead formulate a plan to subdue Luke, and that night – despite a couple of snags – they pull it off, with Luke getting beaten with a tire iron until he is too hurt to move. They call the cops, who come to the shack and take Luke and Jake away to a hospital and take the boys’ statements. The boys are last shown sitting silently together on the shack’s front steps.

LONG VERSION:
At the boys’ shack one night, Luke (Chris Penn) starts to reveal his true nature when he tries to intimidate Kyle’s (Dominic Zamprogna) love interest Megan (Amy Stewart) – who is visiting the shack – into showing her breasts. She manages to get away, and Kyle angrily swipes away one of the pictures of the scantily-clad women he, Eric (Devon Sawa), and Brad (Stuart Stone) keep on a wall of the shack before chasing after Megan. He tries to talk to her about what just happened, but she just tells him that she wants nothing more to do with him and keeps on walking.

As Kyle angrily stomps back into the shack cursing the three of them for ruining his chances with Megan, he finds Eric beaten and bloody on the ground with Brad tending to him. Luke tells him that Brad found out that he is a wanted cop killer, after he saw an article about it that was on the back of the picture Kyle swiped off. He then has Eric stay put and orders Kyle and Brad to find him a getaway car, and warns them to not call the cops or else he will kill Eric.

Kyle and Brad return to town and track down the former’s brother Jake (Jarred Blancard) to a party he is attending, planning to steal his car for Luke. However, their plan fails when Jake spots them as they try to drive away, and they soon crash the car and flee on foot. The next morning, Jake heads down to the shack with a gas can, intending to burn the place down in revenge. He finds Luke and Eric inside, and after Luke brandishes his revolver at him, he tries to run away, but Luke non-fatally shoots him in the back. Eric is then forced to bring Jake into the shack and lay him down supine, leaving him bleeding and in shock. Kyle and Brad stop by later on to report their failure and see what has become of Jake, and Luke releases Eric and orders all three of them to find him a car now, and he will let Jake bleed until he gets one.

Kyle returns home to talk to his father (Nicholas Campbell) about it, and though he finds that he has gotten a letter of acceptance to pilot training school, he can’t muster up the courage to tell his father about his dilemma. The next day, he meets up with Eric and Brad and tells Eric to get his father’s gun. They work out a plan where Kyle will go back to Luke so he can check up on Jake, and Eric and Brad will have to somehow sneak into the shack late that night and get the gun to him so he can kill Luke with it. Brad warns him not to do it, saying that his life will be over if he kills him, but Kyle doesn’t know what else to do.

As Kyle visits Luke and Jake and tells Luke that the car is coming in the morning, Eric and Brad revisit the car that Luke had them get rid of for him, since Brad feels he needs a weapon just in case. After taking the tire iron lodged in the windshield, they look in the trunk and find the corpse of the cop Luke killed. As they tiptoe up to the shack, Luke becomes paranoid and suspects that Kyle is lying to him about the car, so he decides to play a game of Russian roulette with Jake. He leaves one bullet in the cylinder, spins it, and aims the gun at Jake’s head, then questions Kyle about whether or not the car is coming. Kyle eventually admits that it isn’t.

As Eric tries to climb up to the roof with the gun, he falls, losing it and causing a racket. This saves Kyle from being shot by Luke, and Luke heads outside with him to find the source of the noise, but Eric hides. Knowing now that Kyle had planned an attack on him, Luke orders him up into the attic, obviously planning to do away with him up there. Kyle finds Brad waiting there with the tire iron in hand, and as Luke comes up, Brad hits him with it and sends him falling to the floor. He and Kyle then double team him and beat him until he is bloody and too hurt to move. Kyle then picks up the revolver and aims it at Luke, and though Luke weakly goads him to shoot him, he just slowly backs out of the shack and then lowers the gun.

The boys call the police, and they come and tape off the area and take the boys’ statements while Luke and Jake are taken to the hospital. Kyle, Brad, and Eric are last shown sitting silently together on the shack’s steps. 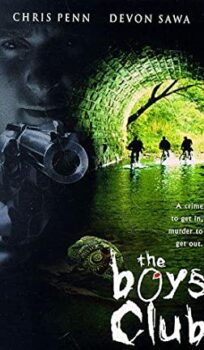