When Ea (Pili Groyne) and five of her Six Apostles…

… all reach the seaside -where also Willy hoped to die-, they notice dozens of people (who are supposed to die very shortly, according to the countdowns on their cellphones) have gathered there as well. Meanwhile, God’s wife (Yolande Moreau), after noticing the Six additional Apostles on the Last Supper painting on her wall, has taken the opportunity to do some cleaning around; while at this, she enters God’s computer room, accidentally shuts down the already troubled computer and, as a result, the airplane carrying a bunch of deportees -including God (Benoît Poelvoorde) Himself- looks like it will fail, crash on the beach and kill everyone, both onboard and on the ground. However, at the very last moment, Goddess replugs the computer, notices the system asking if it can reboot everything -which she answers YES to-, the plane pulls up and Creation happens all over again.

Goddess takes it upon Herself to revamp the landscape all around, which She turns flowery, colourful and whimsical. Things take a happy turn for everyone. Marc and Xenia, as well as François and Aurélie, have respectively started relationships -in an amusing twist, François is seen heavily pregnant with his and Aurélie’s child-. Martine stays with her gorilla. And Ea and Willy strike a friendship. Also, the Sixth New Apostle, Jean-Claude (Didier De Neck), who, after being given the ability to talk to birds by Ea earlier, follows a flock to the North Pole, where he finds what seems to be an Inuit woman and starts a life with her. Victor (Marco Lorenzini), the homeless man whom Ea had summoned to be her scribe for her New Testament, goes on to publish it under the title THE BRAND NEW TESTAMENT and it becomes a best-selling hit, thus changing his luck.

In the end, God is seen in Uzbekistan, forced to labour in a washing machine assembly line, and, at the same time, desperately trying -to no avail- to find an appliance with the tunnel that would allow him to return home. 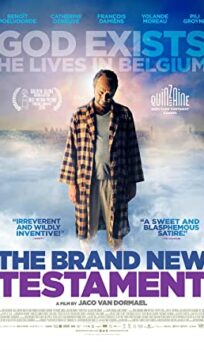