Young Navy officer Willis Keith (Robert Francis), an idealistic preppy from Princeton, reports for duty on the USS Caine, a minesweeper in the Pacific. He is horrified to find that the Caine is an old, broken down, dirty, rusty ship with a sloppy looking crew. Captain DeVriess is a plain-spoken, down to earth commander who doesn’t care about appearances, and wants only to keep his ship functioning. Keith is contemptuous of DeVriess, and thinks DeVriess should be cracking the whip and imposing stern discipline.

When DeVriess is first replaced with Lieutenant Commander Queeg (Humphrey Bogart), Keith is delighted. Queeg seems to be the kind of tough disciplinarianb the Caine needs. But before long, Queeg completely alienates his junior officers and his crew with his tirades, his incompetence, his pettiness and his seeming paranoia. Tom Keefer (Fred MacMurray) convinces Steve Maryk (Van Johnson), the Caine’s second in command, that Queeg may be insane.

During a typhoon, Queeg is frozen with fear and gives contradictory orders. Believing that Queeg will sink the ship, Maryk orders him to be confined to quarters. Under Maryk’s command, the ship escapes the storm and there are no casualties.

Maryk takes full responsibility for his actions, and is placed on trial for mutiny. Barney Greenwald (Jose Ferrer), a Navy pilot who was a lawyer in civilian life, is assigned to defend Maryk. Greenwald is very hostile toward Maryk, but puts on a stellar defense. When Queeg is put on the witness stand, he falls apart under Greenwald’s interrogation. He begins to fiddle nervously with a pair of steel balls, then goes on a lengthy rant about his disloyal offficers. Queeg looks exactly like the panicky paranoid Maryk described. Maryk is found not guilty and set free.

That night, the Caine’s junior officers have a party to celebrate Maryk’s acquittal. Barney Greenwald bursts into the party, drunk. He loudly condemns the Caine’s junior officers, saying they WERE disloyal to Queeg, and should have tried harder to get along with him. Greenwald points out that, while Queeg was a seriously flawed commander, he tried several times to reach out to his men and make a fresh start, but was rejected. In Greenwald’s opinion, the Caine’s junior officers were all guilty of mutiny. Greenwald thinks Maryk was a decent man trying to do the right thing, which is why he helped get Maryk acquitted. But Greenwald says that, despite his acquittal, Maryk no longer has any future in the Navy, and will never be able to become a commissioned officer, as he’d once hoped.

Greenwald blames Keefer more than anyone else. He believes that Keefer poisoned the atmosphere on the Caine, and turned the other officers against Queeg.Greenwald throws a drink in Keefer’s face, and leaves.

Willis Keith realizes that Greenwald was right, and vows to become a better officer. He returns to the port and finds that the Caine’s previous skipper, Captain DeVriess, is back in command. Keith shows the captain more respect this time, and takes his place on the bridge of the Caine. DeVriess sees that Keith has changed, and allows him to take the Caine back to war in the Pacific. 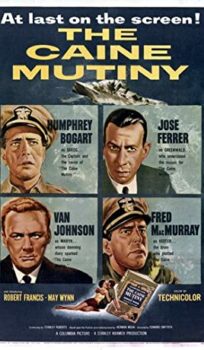