Simon’s real name is Peter (Christopher Heyerdahl). Peter was an orphan along with his older brother Gabriel who was under the care of Father Price (Donald Sutherland). When they were children, Father Price had to choose between the 2 boys on which one would get adopted. Father Price chose Peter, the young brother. Gabriel was forced to stay at the orphanage and suffered.

The dead body that Ben Wingate (Topher Grace) found earlier in the trailer was that of Gabriel who committed suicide one year earlier. Peter had wrapped his body in sheets soaked with formaldehyde in order to attempt to resurrect him. Peter’s mission is to sacrifice terminally ill patients that will give their body to him and their soul to God.

Hazel Micallef (Susan Sarandon) has been on Peter’s tracks and was able to identify Peter’s 12th potential victim. Hazel’s superiors go without her to secure the last victim before Peter gets to him and this angers Hazel because she was not involved and it’s been her case from the start. Angry and off duty, she’s at home and pours herself a drink. Moments later she realizes that her drink was spiked and she faints, seeing Peter approach her has she loses consciousness. Peter drives her to an unknown location and explains his mission to her. She nearly agrees to be his 12th victim and almost drinks the poison but then stops and asks for a second chance. Peter takes the poison away from her and stands up behind her with a gun. Thinking that he’s going to shoot her, he surprisingly shoots himself in the head and becomes the 12th victim in order to resurrect his brother. They both fall and a fire starts from a nearby candle. Hazel is able to escape. Because she chose to live and wanted a second chance, Peter did not kill her because she did not want to give herself to God yet. So Peter sacrificed himself.

Hazel is at the hospital recovering and is visited by her mother (Ellen Burstyn), Ben Wingate and her Detective Ray Green (Gil Bellows) who gives Ben his gift (whiskey) to give to her because he doesn’t want to go into her hospital room just yet. Hazel asks Ben what happened to the body of Peter’s brother Gabriel. Ben informs her that the local police there are on their way to recover the body from the trailer.

At probably the same time as the hospital scene, local police happen upon the trailer and go inside. They go into the back bedroom to find the bed empty and Gabriel’s body gone. The movie ends.

(Assuming that Peter’s plan worked and after sacrificing himself to be the 12th victim, this would have resurrected Gabriel back from the dead.) 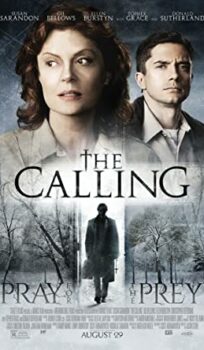