An alien spaceship lands on a farm, and the US Government quickly impounds it and takes it to a nearby military base.  The pilot, which resembles a common house cat, escapes and finds his way into the lab of Dr. Frank Wilson (Ken Berry).  The cat wears a collar that has special powers, like the ability to communicate telepathically and manipulate various things and people, and this is what convinces Frank that the cat (which he named Jake) is indeed an alien.  They sneak onto the military base, where Frank and Jake determine that the craft needs a few ounces of ORC 12 to work again.  Frank realizes that ORC 12 is actually gold, but the amount needed is worth about $120,000!  Meanwhile, the military, headed by General Stilton (Harry Morgan), is in pursuit of the cat and Frank.  Also, a base spy (Roddy McDowell), who realizes what the collar can do, is trying to get the collar to give to his spy agency.

Frank recruits two of his co-workers, Dr. Norman Link (McLean Stevenson) and Dr. Liz Bartlett (Sandy Duncan), to help get the gold and Jake back to his spaceship so he can get home.  Link, who is an avid sports gambler, suggests using Jake to rig the outcome of sporting events to win the money.  Jake rigs the outcome of a horse race and several football games to win some of the money, but Frank wins the rest (with Jake’s help) by winning a high-stakes pool game.  They use the money to buy the gold, but just as they are about to go back to the base, the military shows up and tries to arrest them.  Jake uses the collar to “freeze” the general and his men and they escape.  However, Liz is kidnapped by the spy before she can reach the base.

At the base, Frank installs the gold and the ship is ready to take off.  But they learn at this time that Liz has been kidnapped.  The ship takes off, and Frank and Link think that Jake has left, but Jake then shows up and tells them that they need to get Liz.  He knows that he is now stranded on Earth forever, but after seeing life on this planet, he wants to stay on Earth now.  Frank, Jake, and Link track down the spy and Liz at an airport, and they eventually rescue her in a daring chase involving a helicopter and a biplane.  At the end, the military, without a spaceship to work on, drops the entire case.  The spy is found out and is left stranded (he escaped from the helicopter, but his parachute snagged on a tree branch), and Jake is adopted by Frank and is granted full American citizenship. 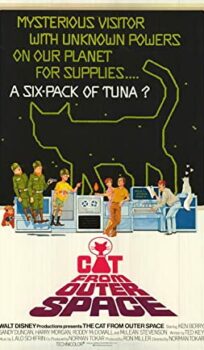