The 4 young children begin to act more and more disturbed, with Paulie initially behaving the worst. The children gravely wound  Robbie by moving a cart with a spiked fork in front of him as he sledges down the hill. Paulie tries to kill his mother, Elaine and sister Casey in a greenhouse, but Casey kills him by pushing him onto a shattered window frame. Chloe tries to find Nicky and Miranda in the woods but the two children kill her by stabbing a colouring pencil into her eye. Elaine and Casey try to leave the house, but Elaine’s husband Jonah, locks them in and leaves with their daughter Leah (Leah bit him earlier on and he now seems to be protecting her). Casey is stuck in a room whilst Nicky and Miranda stalk Elaine. She’s unable to defend herself but Casey kicks through the door and impales Nicky on the shattered wood. They leave Miranda in the house and drive away. On the road, they see Jonah’s car crashed on the side of the road. Casey gets out to investigate and finds Jonah completely buried in the snow, dying. Elaine sees Leah running at Casey with a tyre iron in her hand, but runs her over to save Casey. As they drive out of the woods they see other children, and even teenagers staring at them, indicating it may be a virus that’s causing the children to change. It’s also implied that Casey might be infected herself, as she vomited, just like the other children did earlier in the film. 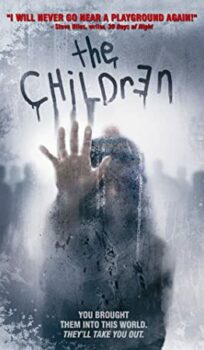