Agent Stone (Lotte Verbeek) is the traitor. When Professor Joshua Mansky (Bill Pullman) goes into the Men’s Room stall to get a bottle of vodka, the real John Gift (Cezary Kosinski) kills Stone and the Russian Agent trying to give Mansky a cork with phony microfilm. John Gift gives Mansky a cork with the real microfilm. The CIA transmits the contents of the microfilm to the United States in the hopes of avoiding nuclear war with Russia during the Cuban Missile Crisis.

Mansky gives the little red book he was given by Fredek (Robert Wieckiewicz) to John Gift and John Gift escapes. Mansky uses the escape route through the Warsaw sewers to flee the chess match. He is caught by General Krutov (Aleksey Serebryakov), who was trying to capture John Gift. General Kurtov has to let Mansky go because of Mansky’s diplomatic immunity. Mansky forfeits the chess match.

Gift and Mansky are extracted by the CIA to America. It is assumed that Fredek is tortured to death. Mansky refuses CIA protection. The microfilm in the cork helps defuse the Cuban Missile Crisis.

In the postscript, we are shown Gorbachev and Reagan signing the Intermediate-Range Nuclear Forces (INF) treaty, effectively ending The Cold War. In February, 2019 both the U.S. and Russia pulled out of that treaty. 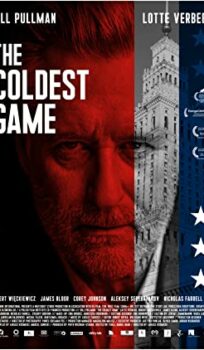