Colony 5 had been slaughtered by a roving group of cannibals. Graydon (Atticus Dean Mitchell) and Briggs (Laurence Fishburne) are killed during their attempts to escape and prevent the group from finding Colony 7. Sam (Kevin Zeigers) escapes back to Colony 7 to warn the group, only not to be believed by Mason (Bill Paxton), who has taken control.

The cannibals find them and break in. Mason is mortally wounded during the attack and is eventually left behind by Sam when he refuses to leave the Colony. Mason, realizing he won’t survive, ruptures a gas tank, killing himself and most of the cannibals, save for the leader. The leader fights Sam, who eventually beats and beheads him with a sharp knife.

Sam escapes with his girlfriend Kai (Charlotte Sullivan) and ten others. Taking Colony 7’s seed supply, they head off to a location Sam found out about earlier where the ice age has been reversed, so they can use the seeds to grow food naturally and survive. 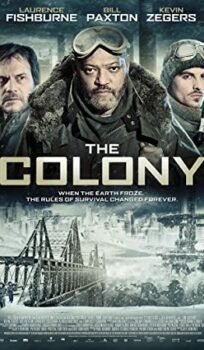