Bobby attempts to act like nothing is wrong but eventually has to sell his Porsche and the house and move his family in with his parents. With no options, he goes to work for his brother in law Jack (Kevin Costner) and learns some humility.

Phil is pushing sixty and has no prospects whatsoever. Burdened by the strain of his finances and being unable to support his family, Phil commits suicide.

Gene is fired from GTX by his friend and CEO James Salinger (Craig T. Nelson). Haunted that corporations like GTX have destroyed lives instead of enriching them, he strives to build a company of his own where his ethics can remain intact. After Phil kills himself, Gene confronts Salinger and admonishes him for missing the funeral and the fact he took 22 million in bonuses while the people he fired lost everything. Salinger is unrepentant to the end, saying the stock prices have jumped and his shares are now worth 600 million.

Gene begins his company and takes on Bobby and about a dozen of former GTX employees. The film ends with Bobby (now making half what he made at GTX; 80k) going to work as a supervisor for the employees as they attempt to build Gene’s company from the ground up. 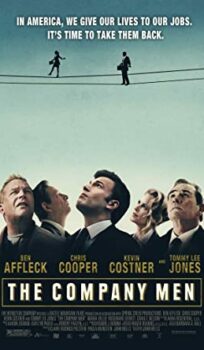