The movie begins with David and Russel investigating several murders of people who seem to have gone insane. Through their investigation, they find a huge plane has crashed into a creek that runs into their drinking water supply. The murderers they were investigating turn out to be the people who live closest to the water supply.

The quarantine that the military sets up gets broken by the infected driving a truck into the fences. The non-infected people all scatter and run back into the town, ruining the quarantine. The military begins to simply shoot any civilian on sight. David, Judy and Russel make it out of the staging area alive and go back to town.

Everyone has, of course, gone crazy. Along the way, they kidnap two military personnel. First is a regular soldier, who they ambush and interrogate, but eventually let go. He tells them that they need to go to a truck stop at the edge of town to be evacuated. They let him go. As they travel to the truck stop, they ambush a military business man. He reveals that the plane was actually carrying a biological weapon named Trixie, which was meant to “destabilize the population of a given city via it’s water source”. The plane was actually flying to Texas to be incinerated, but accidentally crashed. Russel kills the man before they get any more info. This, combined with the nose bleed (which has become a sign someone is infected), makes Russel realize that he, too, is infected.

They make it to a road block that they have to cross in order to continue. Russel decides that he will use himself as bait so that David and Judy can make it past them. He runs out into the open and points a gun at the soldiers, who shoot him dead. David and Judy make it across the roadblock unseen and safe.

David and Judy make it to the truck stop where there is supposed to be a rescue, but instead find that everyone who went there was shot and killed, then had their bodies burnt. There was no rescue, it was a trap, but it is deserted now. They find several military walkie-talkies around the room, and find out that something is incoming, along with a count down. They steal an 18 wheeler truck from the truck stop and drive it out of the city. When the count down reaches 0, a nuclear bomb is dropped on their town, completely obliterating it. David and Judy make it far enough to escape the bomb, but their truck is destroyed. They begin walking and are shown walking towards the sky line of Cedar Rapids. It is implied that they make it there alive.

However, the military satellite seen at the beginning of the movie catches David and Judy walking towards Cedar Rapids and initiates another quarantine protocol on that much, much larger city. While David and Judy may have escaped, them surviving will result in the deaths of over one hundred thousand people.

Part way through the credits, they air a news clip from Cedar Rapids. The military has covered everything up, and claims that the explosion was not a nuke, but instead an oil refinery exploding by accident. 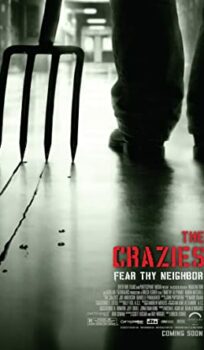