Judah (Richard Brooks) has his henchmen kidnap Sarah (Mia Kirshner) (Eric Draven’s close friend from the first film) so Ashe/The Crow (Vincent Perez) will come to him. Ashe succeeds in killing all of Judah’s henchmen and then heads straight for his hideout to take him out. However, before he can face Judah and save Sarah, Judah traps the crow that is protecting him, and then kills it and drinks its blood, gaining Ashe’s invulnerability. Ashe is rendered mortal as a result.

Judah then meets Ashe outside, where he beats him viciously and tries to kill him by hanging him. Sarah – having been freed earlier by Judah’s psychic Sybil (Tracey Ellis) – comes to Ashe’s aid by stabbing Judah in the forehead with a knife, causing him to let go of the rope he was hanging Ashe with. Judah pulls the knife out, since he can’t be harmed, but when he comes towards Ashe with the knife, Sarah gets in his way and gets fatally stabbed in the abdomen. Ashe then impales Judah on a metal pipe and summons the huge flock of crows flying up above (which, Sybil explained to Sarah, are the souls of people Judah had killed before Ashe) to take Judah. They all fly through him and into Judah until he disappears in a flash of light. Ashe then holds Sarah until she dies.

His task completed, Ashe returns to the afterlife, and he finally reunites with his son. 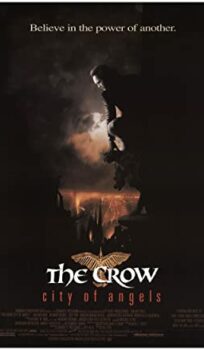