Submitted by Herbmeistr and Katie

Leigh Teabing ( Sir Ian McKellen) is the Teacher, and has been exploiting the Opus Dei (a branch of the Catholic Church) to aid his own quest for the Holy Grail. It turns out the Grail is not a cup, as previous films have suggested, but the remains of the ancient Mary Magdalene, Jesus Christ’s supposed companion/spouse.

Teabing confronts Sophie Neveu and Robert Langdon ( Audrey Tautou and Tom Hanks) at the supposed resting place of Mary Magdalene and threatenes them to open the cryptex (which contains the actual whereabouts of Mary Magdalene). Robert secretly releases the map from the cryptex keystone and breaks the cryptex so it appears that the clue inside it is lost forever, which allows the police to arrest Teabing, as their Captain Bezu Fache ( Jean Reno) is also a member of the Opus Dei.

Finally, back in France, Langdon has a realization that the Holy Grail was there in Paris all along. The clues in the map lead Langdon back to where it all started, at the Louvre, below the Roseline, between the inverted pyramid (the Chalice) and the pryamid beneath (the Blade). In a room surrounded by the art of the masters, below which lie, ever permanently, the remains of Mary Magdalene. Langdon kneels, as the Knight finishing his quest, and bows his head in reverence to her Holiness. 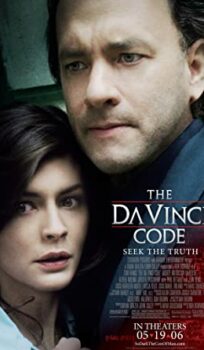