Submitted by Greg, Herbert and The Haip

After being captured, the Joker (Heath Ledger) tells Batman (Christian Bale) that he has Harvey Dent and Rachel Dawes (Maggie Gyllenhaal) in separate locations chained to barrels filled with gasoline. Batman can only save one of them. Batman goes to save Rachel and Gordon goes to save Harvey, but the addresses the Joker gave them are reversed. So Batman saves Harvey but Rachel is killed in theexplosion. The left side of Harvey’s face is badly burned. The Joker escapes. Harvey (now ‘Two Face’) starts to go crazy and gets revenge on everyone who had anything to do with Joker’s plan and Rachel’s death.

Batman uses Fox’s cell-phone sonar technology to wire all of Gotham’s cellphones together in an effort to locate the Joker. He eventually finds and captures him again. Meanwhile, Harvey has kidnapped Gordon’s family and taken them to the place where Rachel died. He blames Gordon because some of his officers (who were escorting Rachel and Harvey when they were abducted) were working with the Joker. Batman arrives saves Gordon’s family, in the process causing Harvey to fall to his death.

Batman tells Gordon that Gotham does not need to know that their hero, attorney Harvey Dent became this monster, and that the only way to honor his memory is to say that Batman committed the murders Two-Face did, making Batman a wanted criminal. With Gordon as the commissioner and head of the Major Crimes Unit, Batman recommends that the city look to their police force for protection, so the Batsignal is destroyed.

In the aftermath, Gordon tells his son about the heroic figure that watches over Gotham, a Dark Knight named Batman. 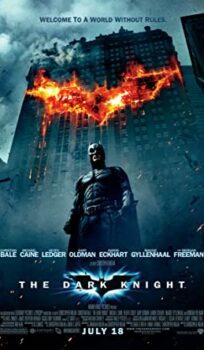