Capt Courtney (Errol Flynn) & Scott (David Niven) are English fighter pilots on the Western Front in World War 1.  Courtney is a flight leader and Scott is his best friend.  They are both disgusted with their Squadron Leader Brand (Basil Rathbone) because they feel he sends up inadequately trained replacements who don’t stand a chance to survive. They don’t recognize that Brand doesn’t really want to engage the new replacements but he receives direct orders from his superiors for very difficult missions and to fly who he has available, thus assuring most replacements don’t survive long.

They find out that the Germans have moved one of their best squadrons into the area.  It is led by a man named Von Richter.  After one of their first encounters, Von Richter flies over their base and drops a pair of boots signifying the British pilots will soon be wanting to join the infantry.  Courtney and Scott retaliate the next morning and (against Brand’s orders) bomb and strafe the German airbase into oblivion.  Brand is furious but his superiors are so impressed with the results that they promote Brand and instruct him to designate his replacement.  He designates Courtney as the new Squadron Leader.

Courtney starts having the same issues Brand had with superiors assigning them very difficult tasks at full effort thus continuing the slaughter of replacements.  When one set of replacements arrives, Scott’s younger brother Donnie is included.  True to form, the flight is assigned a difficult assignment for the next morning and Donnie is assigned to fly.  Scott asks Courtney to give him a few days to better train Donnie for combat but Courtney insists he must fly, making Scott very angry.  Courtney calls his superiors requesting he be given a few days to provide additional training to his replacements but he is refused.  Sure enough Donnie is killed on the mission and Scott becomes estranged from Courtney.

A couple of weeks later, Brand returns to the base to deliver instructions for a special mission.  The Germans have stockpiled supplies at a rail junction in preparation for a new offensive.  The junction is 60km behind enemy lines. Courtney knows this is a suicide mission and wants to fly it himself but is told he cannot.  Scott volunteers to fly it.  The evening before the mission, Courtney goes to Scott’s room with information on the flight plan.  He proposes a toast, and another and then another.  Since they know this is a suicide mission, they basically reconcile with Courtney eventually getting Scott drunk enough to pass out.  The next morning Courtney takes off in place of Scott.  The Germans spot him and Von Richter and some of his squadron are dispatched in pursuit.  Scott reaches the rail junction and manages to totally destroy all the stored fuel, ammunition and explosives.  Von Richter and his companions arrive and a big dogfight ensues.  Courtney manages to down them all (including Von Richter) except for the last one who manages to shoot down Courtney.

Back at the British base, Scott is hopeful that Courtney has somehow managed to survive.  They hear a plane approaching but it is a German plane.  It drops a small package which turns out to be Courtney’s helmet and goggles, signifying the death of a brave man.

Scott is promoted to Squadron Leader and new replacements arrive who Scott informs they will begin flying immediately. 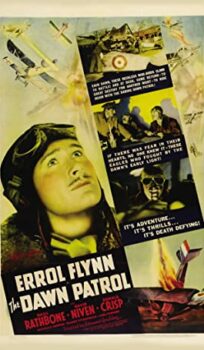