POOPER: (Thanks to James T)
During their tour of duty, Nick (Christopher Walken) goes MIA and stays in Vietnam, addicted to the Russian Roulette gambling circuit. Michael (Robert DeNiro) returns sometime later to bring him home but ends up facing Nick in a game of Russian Roulette. Nick blows his brains out and Michael returns home, forever changed.

LONG VERSION:
The film opens in a small town in Pennsylvania where Steven (John Savage) is getting ready to marry Angela (Rutanya Alda). He has a number of rowdy young friends, including Michael (Robert De Niro), Nick (Christopher Walken), Stan (John Cazale), John (George Dzundza), and Axel (Chuck Aspegren). Nick is dating Linda (Meryl Streep), although it is clear that there is also an attraction between Linda and Michael. The wedding also serves as a “going away” party as Steven, Michael and Nick are shipping out to Vietnam soon after the wedding to fight in the war. After the wedding, Nick and Michael share a close moment where Nick asks Michael to promise not to leave him behind in Vietnam. Before shipping out, the five friends go deer hunting one last time. Michael, obsessed with killing deer in one shot, is the only one to kill a deer. The friends share a somber moment in John’s bar after the trip.

In Vietnam, Michael, Steven, and Nick are captured by an especially sadistic group of enemies. They are forced into cages almost fully submerged in filthy water. The prisoners are forced to play Russian roulette for the entertainment of the enemy soldiers. Steven chickens out during a game against Michael (which ends up saving his life as the bullet was in the chamber and ends up only grazing his head when he pulls the trigger). Being the sanest of the prisoners and realizing they will all eventually die, Michael convinces Nick to fight against the enemy soldiers when it is their turn to play against each other. Michael persuades the enemy soldiers to load the gun with three rounds. He and Nick luck out not to be killed after three shots and then fire upon and kill their captors. The pair rescue Steven (who had been thrown in a rat-infested cage) and make their escape. A US helicopter locates the trio but only manages to save Nick before needing to flee from enemy fire. Steven is severely injured in the rescue attempt, to the point where Michael must carry him through the jungle. Exhausted, Michael eventually gives Steven to a convoy of South Vietnamese troops (who are allies of the Americans) and asks that they take care of him. The three friends are now separated.

Nick is put into a military hospital. He clearly suffers from PTSD. Nick can only barely remember his life in America. After being released from the hospital, he is taken in by a man named Julien who is involved with an underground Russian roulette ring. He brings Nick to a competition where men are paid handsomely to play the game. Unbeknownst to Nick, Michael is in the crowd of onlookers. Nick’s trauma surfaces and he interrupts the game, grabbing the gun and shooting it at his own head (the chamber is unloaded, so he survives). The crowd is incensed by the interruption and chases Nick and Julien out of the venue. Michael desperately but unsuccessfully tries to reach Nick in the ensuing panic.

Michael returns to the US, but it is clear that he is not the man he used to be. The only person who seems to soothe his rough edges is Linda. Eventually, Michael and Linda strike up a romantic relationship (she reveals that she has not received any communication from Nick and that Nick has been designated AWOL by the military). Michael goes deer hunting with Stan, Axel, and John, but is unable to shoot and kill a deer that he successfully stalks. When Michael returns to the cabin after hunting on his own, he finds Stan threatening Axel with a gun during a drunken dispute. Michael forcefully disarms Stan and then demonstrates that the gun was actually loaded (Stan incorrectly claimed it was not). In a fit of rage, Michael fires the gun at Stan and himself after loading it with random rounds (though all the rounds fired turn out not to be loaded)

Michael learns that Steven also returned, but nobody knows where he is. Michael confronts a shell-shocked Angela, who gives him Steven’s contact info. Michael eventually finds Steven in a hospital as he left the war paralyzed in both legs and one arm. Steven had been unwilling to return home, embarrassed by his physical state. Ultimately, Michael forces Steven to return to the town and to his family. Before they leave the hospital, Steven reveals that someone has been sending him large amounts of money from Saigon. Michael realizes that Nick must be the benefactor and is still alive. He returns to Saigon to find Nick and bring him home as he had promised.

Michael arrives just days before the Americans are set to leave. The entire city is in a state of disarray. Michael finds Julien and pays Julien to take him to Nick. Ultimately, Michael is taken to a Russian roulette den where Nick is set to play (Nick has been playing Russian roulette ever since he and Julien disappeared, he is now somewhat of a legend for how many games he has won). Michael confronts a drug-addled and severely malnourished Nick. But Nick has no memory of Michael and spits in his face when Michael tries to take him away. Michael pays the leaders of the game thousands of dollars to play against Nick (knowing this will be his only other opportunity to talk to Nick). They play a version of Russian roulette where an additional bullet is added after each shot. Nick and Michael both survive one round, with Michael pleading for Nick to remember who he is. On Nick’s second turn to shoot, he finally remembers Michael (particularly, his motto to kill a deer in one shot). Though Nick remembers, he can’t stop himself and takes the shot. Nick’s luck runs out as the chamber was loaded and he is killed.

Michael returns to America with Nick’s body (thus, fulfilling his promise). The movie ends with a funeral for Nick. Steven, Angela, Axel, Stan, Linda, and Michael all retire to John’s bar after the funeral. As John serves them food, the group begins to sing “God Bless America” and toast in Nick’s honor. 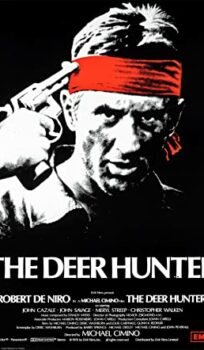