With Detective Jenkins’ (Ralph Martin) help, Brooke (Linda Hoffman) finds out Feinstone’s/Caine’s (Corbin Bernsen) location, and goes to his office one night and seduces and then attacks him with scissors. As they struggle, Jamie (Jillian McWhirter) shows up, and – not knowing of Feinstone’s past – she knocks Brooke out. As she goes to call the cops, she finds Bev’s (Susanne Wright) and Robbie’s (Lee Dawson) mutilated corpses in his closet, and knows now that Feinstone is an insane killer.

He pursues her upstairs, knocks her out, and then straps her into a chair, but when he tries to use an electric drill on her mouth, he suddenly backs off, since he again confused Brooke with Jamie in his mind. Jamie gets free and arms herself with a big piece of wood, and as he goes into the hallway, an armed Brooke reappears. Feinstone makes Jamie knock Brooke out again and then disarms her. When he goes after Jamie again, she grabs a nail gun and shoots him multiple times. He falls, landing on top of her and knocking her out.

Feinstone is then shown staggering downstairs towards the door, and as he gets closer to it, Bernice (Wendy Robie) and the townspeople he made friends with throw a surprise party for him. Their expressions change to horror upon seeing his face, and he leaves without a word. Bernice finds Jamie upstairs waking up from unconsciousness. When she asks where Feinstone is, he is shown driving off for elsewhere with nails sticking out of his face, laughing insanely. 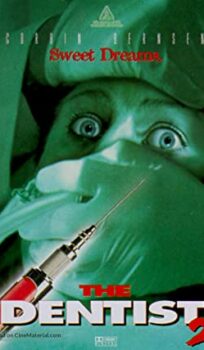