Pooper:
While all other souls perish at the carnival, John manages to redeem himself and the Devil sends him to Heaven. Realizing that the Devil’s Carnival can now redeem people’s souls, the Devil intends to put Heaven out of business by helping people find redemption (thus having people look to Hell for salvation).

Long Ending:
In this musical rock-opera, we open with god (cameo by Paul Sorvino), portrayed as a puppet-maker, painting a wooden doll. When he makes a mistake on one, he dismissively throws it into the rubbish bin.

We then cut to the story of three people on the cusp of death. John (Sean Patrick Flanery) has locked himself in the bathroom and slit his wrists while his wife screams outside the door, trying to get in. Tamara (Jessica Lowndes) is barricaded in a car as her boyfriend pleads for her to say. Unfortunately for her, he pulls out her gun when she decides not to drive off. Finally, we see Ms. Merrywood (Briana Evigan) flee to her trailer, hotly pursued by the cops. They have followed her after she stole some valuables, and she appears to ready herself for a fight. All three are then sucked down to Hell, to the Devil’s Carnival, where the Devil has assigned his minions to test the newcomers.

The film ends with the Devil saying the rules have changed and that his carnival, instead of punishing and dooming its souls to repeating the same sins, can actually help people overcome their evil ways and redeem themselves. The Devil changes the way the Carnival is operated to maximize such results, stating that this will be his new war on Heaven. Now, people will turn to Hell for redemption, rather than to Heaven. 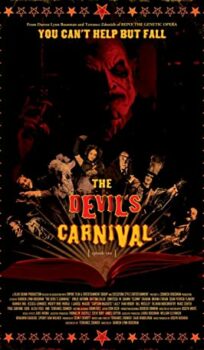