Two New Zealand soldiers on the eve of D-Day during WWII, Captain Ben Grogan (Craig Hall) and Sgt. Joe Tane (Karlos Drinkwater) are sent to a Nazi occupied island to blow up a anti-aircraft gun to confuse the Germans to the true location of the invasion. When they get there, they investigate strange noises in the bunker, finding numerous dead soldiers. Tane is killed by Col. Klaus Meyer (Matthew Sunderland) and Grogan is knocked out by him.

Meyer reveals to Grogan that he was tasked in summoning a demon to help the Third Reich win the war. The demon takes the form of Grogan’s dead wife Helena (Gina Varela). Grogan and Meyer reluctantly team up to send the demon back to hell. However, Meyer forgets to tell Grogan the ceremony requires a human sacrifice and tries to kill him. Grogan pushes Meyer out of a protective ritual circle and doubles crosses Meyer, stealing an enchantment page that would have protected him. The demon decapitates Meyer and tries to seduce Grogan as Helena. Grogan tricks the demon back into leg irons and leaves, content that it can never leave the island and that German reinforcements that are being sent to the island will be killed by it.

Grogan heads back to the beach and buries the picture of his dead wife in the sand. He looks out into the distance to see the D-Day operation commence at Normandy beach. 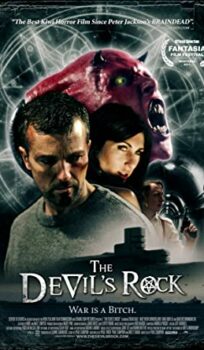