Cliff Buxton (Sam Neill) and his team are responsible for keeping the radio telescope at the Parkes Observatory in New South Wales, Australia pointed at the Apollo 11 spacecraft so that audio and live video can be transmitted throughout the mission to around the world while Australia is in sight of the moon.

When the town has a blackout, the radio telescope loses its lock on the spacecraft and the data on the observatory computer is wiped out because Mitch (Kevin Harrington) did not prime the fuel pump in the emergency generator. So, the team lies to NASA and a visiting U.S. Ambassador.that they are still up and running and that the cause of the transmission loss is not on their end until Glenn Latham (Tom Long) is able to calculate Apollo 11’s position between the earth and the moon by hand. They are able to realign the dish and they listen to the moon landing.  (In reality, they never lost power, this event was invented for the movie.)

A few hours later, a 50-kt windstorm threatens the facility, which was only designed to withstand 30-kt winds. (This did actually happen). Nevertheless, the team is able to align the dish with the rising moon and beam pictures of Neil Armstrong’s first steps on the moon throughout the world.

(While it is depicted in the movie that Parkes had the only signal, the Goldstone and Canberra tracking stations did have a signal as well, but Parkes’ signal was stronger and was the one primarily used to transmit the pictures around the world.) 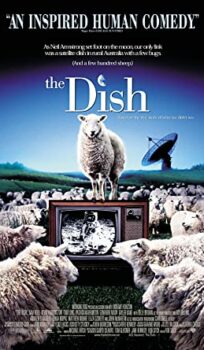