SHORT VERSION:
Billy, Henry, Jack, and Albert – with help from Billy’s ex-girlfriend Riley – stop the corrupt cops O’Malley and Gianelli from killing Dr. Weitzman at the hospital he was taken to and subdue them sufficiently enough for them to be arrested. The quartet are cleared of any and all wrongdoing, and during all of the events, they experience some growth away from their various issues. Billy and Riley get back together, and she promises to wait for him while he completes his therapy.

As the quartet and Weitzman are driving back to Cedarbrook Mental Hospital, Albert whispers to Billy that there is another New York Yankees game going on back in New York tonight. After Billy initiates a brief discussion about it with everyone else, Weitzman decides to let the guys take an unsupervised trip back to the city to watch the game, and they do so just after dropping him off at Cedarbrook’s front doors.

LONG VERSION:
Billy (Michael Keaton), Henry (Christopher Lloyd), Jack (Peter Boyle), and Albert (Stephen Furst) are able to find out that Dr. Weitzman (Dennis Boutsikaris) is being treated at Mercy Hospital, and they enter his room just in time to stop the crooked cops O’Malley (Philip Bosco) and Gianelli (James Remar) from trying to asphyxiate him. O’Malley and Gianelli are able to escape in their car despite Billy trying to catch them, and he tells a security guard outside that they just tried to kill someone, but the guard skeptically replies that they couldn’t have because they are cops. Meanwhile, a nurse comes in and sees Henry, Jack, and Albert trying to help Weitzman breathe again, and she incorrectly draws the conclusion that they and Billy were trying to kill Weitzman and tells an orderly to call security and get them arrested. The trio run off and meet Billy outside, and Billy telephones Cedarbrook Mental Hospital and tells Dr. Newald (Milo O’Shea) over his speakerphone that two policemen are trying to do away with Weitzman. Dr. Talmer (Jack Gilpin) and Dr. Verboeven (MacIntyre Dixon) – who are listening in on the call – tell Newald about how Billy should not be believed due to his pathologies, and after they find out from Billy where he is calling from, Talmer calls the cops. The quartet take off when a police cruiser pulls up to them moments later, and Billy soon tells the others that they need to get $165 to get the van they all came in out of the impound and get Weitzman out of the hospital before the dirty cops can make another attempt to bump him off. Meanwhile, O’Malley and Gianelli get told by their superior about how Alvarez, the cop Weitzman saw them kill, was discovered in a warehouse near where Weitzman was found, and Gianelli takes the opportunity to pin Alvarez’s murder on the four patients as well. When their superior leaves them, O’Malley tells Gianelli that the quartet will likely visit their doctor again.

The patients visit Billy’s ex-girlfriend Riley (Lorraine Bracco) – whom he got back in touch with the day before – in the apartment she shares with her new boyfriend Ed (Michael Lembeck) to get help from her, but they see Newald being interviewed on a TV news program and he tells the reporter that the guys attacked Weitzman twice and should be considered dangerous. After Ed also sees this report as well as photos that get shown of the guys, he tries to call 911, which forces the quartet to retreat. Unfortunately, Albert loses his baseball cap in the lobby and turns around to go get it, enabling arriving policemen to capture him, and Billy sees this and turns back to help him and gets cuffed as well. Henry and Jack walk away without any trouble. Billy tries to warn the cops at the station he and Albert are taken to about the danger Weitzman is in, but no one believes him.

Jack goes to his former advertising agency to ask his old co-worker Tom for the money he and the others need, but he just gets the cops called on him. Henry visits the wife and daughter he hasn’t spoken to in two years, and he finds out from his wife that the police have already called the house and have already nabbed his comrades. She then asks him why he never answered any of her letters, and he replies that he thought he lost her and was afraid to find out. He then implores her to give him some money, since he is the guys and Weitzman’s only hope now, so she gives him $170. He then gives his daughter his treasured clipboard when she asks for it, and his wife tells him that the door will be open for him whenever he feels ready to come back home. He then leaves and goes to the police station, but gets locked up right away, and he and the others are soon arraigned at the 100 Centre Street court, where they all enter a plea of not guilty.

As they are in a cell waiting to be transported to Eastside Psychiatric Hospital, Billy rails against the others for their various issues until he gets paid a visit by Riley. She tells him that she wants to help him and the guys, so he tells her to go over to Mercy Hospital and warn Weitzman about the two cops out to kill him and also gives her short descriptions of them both. They then press their lips against the glass in a kiss before a guard comes to take Billy away since he is being moved now. After he returns to the cell, Albert walks up to Billy and whispers an insult directed at him in his ear, his first real word to anyone. The surprised Billy agrees with him on it, and points out to Henry and Jack that this proves that Weitzman knew what he was doing, along with Henry returning home and seeing that he isn’t the Department of Sanitation and Jack seeing that he is a better copywriter than a messiah. He says that they are all getting better, and they now must do everything they can to prevent those dirty cops from burying Weitzman.

When Talmer and Verboeven show up with a male nurse and a guard to put the quartet in a waiting van, Billy and Albert pull off a ruse to get the guard’s gun and then force the guard and the others to get into the back of the van instead. After Talmer warns them that every policeman in New York will be looking for them if they are not at Eastside in 15 minutes, the guys force him and the others to exchange clothes with them, resulting in Talmer and company getting locked up and sedated instead. Meanwhile, Riley arrives at the hospital, but O’Malley and Gianelli end up on the same elevator she is on, and she realizes that they are the crooked cops Billy warned her about when she heads for Weitzman’s room and sees them walking behind her the whole way. The quartet arrive shortly afterwards, and Billy has Albert give him the gun and tells him to stay in the car while he, Henry, and Jack go in to aid Weitzman. Riley gets to the room just ahead of the dirty cops and keeps them from going in, and Billy and company turn up seconds later and go inside while Riley alerts Billy to the presence of the antagonists. They chat with Weitzman and tell him off-screen about the life-threatening peril he is in, so he has the guys and Riley wheel him out. However, Billy is held back when the same nurse who believed his friends were trying to bump off Weitzman earlier tries to notify security and he has to rip out the phones.

O’Malley and Gianelli go outside and the latter tries to snipe Weitzman from their car with the silenced pistol he planned to use in the room, but Albert spots them and drives the van into their car to thwart them. Riley pushes Weitzman away from the scene, and Henry, Jack, and Albert are able to grab hold of O’Malley and daze him, but Gianelli hops out of the car and chases after Riley. Billy meets up with the guys and finds out where Riley and Weitzman went and heads in that direction. Just as Gianelli finds the duo amid some shipping containers and is about to shoot them, Billy comes up from behind and puts the barrel of his gun against Gianelli’s temple and forces him to surrender. Later, the police and news crews are called in, and Weitzman and the patients clear the air on everything and O’Malley and Gianelli are arrested. While the others are loaded into the van they came into town with, Billy talks with Riley and tells her that the only thing he has missed these last 18 months is her, and they kiss. She then asks Weitzman if Billy is ready to get out, and he replies that the prognosis looks pretty good.

As the gang drives back to Cedarbrook, the patients tell Weitzman about what became of Talmer and Verboeven, and Albert whispers in Billy’s ear that there is another Yankees game going on back in New York tonight. After some discussion about it, Weitzman decides to let them take an unsupervised trip back to New York to watch the game, and they do so just after dropping him off at Cedarbrook’s front doors. 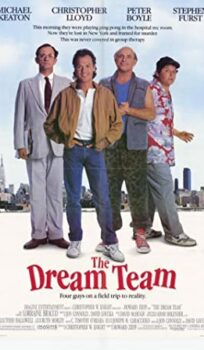