The film is an extended hypnosis flashback as a cop tries to regain his memory.

Fisher (Michael Elphick) , an ex-cop, is sent back to Europe to investigate a series of killings known as “The Lotto Murders”. Fisher learns his mentor Osborne (Esmond Knight) had a suspect “Harry Grey” who died in a car accident years before. Fisher uses Osborne’s book, The Element of Crime, to profile Grey by literally retracing his steps role playing as the killer. Fisher even teams up with a prostitute, Kim (Meme Lai) and learns she had a previous relationship, and child with Grey.

After discovering another body, Fisher deduces that Grey is still alive and plans to kill a seventh and final victim. He sets a trap with the victim to be but frightens her when a totem of the killer falls out of his pocket. He suffocates her when she panics, just like Grey had done to his other victims. By profiling Grey so extensively, Fisher has ultimately *become* him.

Fisher is recalled by his superior, Kramer (Jerold Wells) who explains Osborne sent a confession to one murder, and the one Fisher committed ultimately before hanging himself, under the guise of finishing Grey’s work. At the body, Kim is there with her child, looking at Fisher suspiciously. Since Fisher figured out the MO, the implication is he framed his mentor for the murders and staged his suicide. 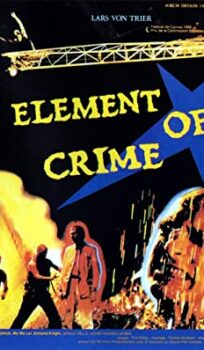