Brothers Aaron (Aaron Moorhead) and Justin (Justin Benson) are survivors of Camp Arcadia, a so-called UFO death cult a la Heaven’s Gate. After supposedly exposing the camp’s dirty secrets and pulling Aaron out for deprogramming (it turns out Justin lied), he and Aaron live a dreary life as housekeepers, subsisting on ramen noodles and living in a dingy apartment. Justin, the alpha bro, wants nothing more to do with Camp Arcadia, but a video sent from lovely member Anna (Callie Hernandez) makes beta bro Aaron want to return. Reluctantly, Justin agrees, and they go back to visit.

At first, all is well: a campfire, ale chugging, and a ritual tug of war called the Struggle. Soon, however, the brothers’ reality and their perceptions of it become blurred. They talk to leader Hal (Tate Ellington) about who or what runs the camp. Hal says “it” is a higher power that causes “ascension” when “the third moon rises.” There IS a third moon in the sky, as well as a second. Why? Justin insists on leaving, but Aaron wants to stay.

When both brothers discover that everyone at Camp Arcadia, and in its immediate radius, is trapped in an infinite temporal loop that a Lovecraftian entity controls, they know their time is literally running out. On the night of the third full moon, every regular member including Hal “ascends” – dies, vanishes, and is returned to his or her previous place in the loop. Justin and Aaron barely make their escape, vowing to be equals as well as siblings. 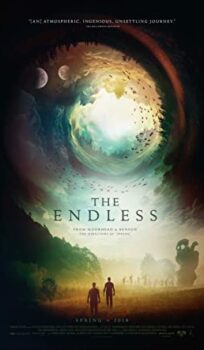