Long Ending:
This film is based on a true story. Carla Moran (Barbara Hershey) is a hard-working single mother of a teenaged son named Billy (David Labiosa) and younger girls Julie and Kim. She returns from a long day of work when she is suddenly attacked and raped by a seemingly invisible assailant. After further supernatural activity occurs, Carla flees the house with her kids to stay with her friend Cindy (Margaret Blye). Enraged by Carla leaving the house, the ghostly entity later tries to kill Carla in her car.

Cindy convinces Carla to visit a psychologist at the local university. The psychologist, Phil Sneiderman (Ron Silver), believes that the attacks are self-inflicted and caused by psychological trauma Carla suffered in the past. We learn that Carla has had a tough life. She was raised by abusive religious zealots. She first got married at 16 to a drug user (Billy’s father) who died in a motorcycle crash. Carla then later started a relationship a much older man (Kim and Julie’s father) who later abandoned them. Even now she is dating a man who refuses to commit to their relationship. Phil truly cares about Carla and becomes emotionally invested in her case. The other psychologists engage in victim blaming and accuse Carla of narcissism and self-harm.

Although Carla is raped again by the entity, it is still unclear whether the issue is supernatural or psychological. However, the issue is soon resolved when, during another assault, the spirit breaks Billy’s hand when he tries to rescue his mother and manifests as a ball of electricity. When Carla stays at Cindy’s house again, the entity demolishes Cindy’s apartment in front of them. Things come to a head when the entity rapes Carla in front of her boyfriend (who is also injured when he tries to intervene). With so many other witnesses to these attacks, Carla is convinced the issue is supernatural. She stops her sessions with Phil after he refuses to accept that her problems are not psychological (and after he makes some boorish accusations against her).

By chance, Carla meets several paranormal researchers who also work at the university. They go to Carla’s house and manage to record various supernatural phenomena (although deniers, like Phil, continue to offer other explanations for the supernatural events). In order to prove the entity is real, the researchers devise an experiment to induce the spirit to attack Carla in a controlled environment. By controlling the environment, their claims will be immune to denials. They also hope that they can help Carla by freezing the entity when it manifests. Carla agrees to the experiment.

The researchers construct a facsimile of Carla’s home inside the university’s basketball arena. The facsimile is not connected to power or water, meaning any supernatural phenomena can only be attributed to the entity. They have also suspended tanks of liquid helium over the fake home. When the entity manifests, Carla is instructed to run into a safe room and they will shoot the helium at the spirit to freeze it. Phil and his boss try to stop the experiment given the high risk level, but are unable to do so. Instead, they eventually are allowed to observe it.

The entity arrives and turns out to be far more powerful than previously witnessed. It destroys all the video cameras recording the experiment and then possesses the machine controlling the liquid helium. Phil runs down to the fake house and helps Carla make her way to the safe room. She taunts the entity, telling it that while it may beat her and haunt her, it will never be allowed to rape her again. The entity uses electricity to destroy the safe room, but in so doing, it also ruptures the liquid helium tanks. Phil and Carla escape just before the tanks explode. The liquid does, in fact, freeze the ghost. It soon manages to break out, exploding the ice that it’s covered in. Carla immediately flees the site, realizing that none of them can help her. With all of their equipment destroyed, the paranormal researchers ask Phil’s boss to corroborate what has happened. He declines to do so (and ostensibly, Phil will also refuse to corroborate what they witnessed).

The film ends with Carla moving out of her house. The entity speaks for the first time and insults Carla. She stares defiantly at where the voice was heard. Text informs the viewer that she moved to Texas. It also states that although the entity’s attacks diminished in intensity and frequency, they never fully stopped. 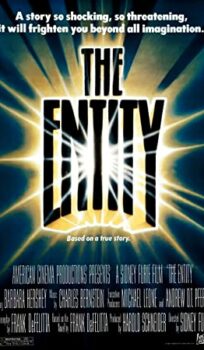