Ben and Ruth (Jessica Harper) are a young couple who buy a large house on a farm in Louisiana after World War II.  Little by little they learn the history of the house.  All the previous occupants have died under strange accidents.  The history unfolds slowly by flashbacks.

In 1928, Mr and Mrs Mullins were being evicted from the house.  She says they should just move on, but he points out that they have killed 3 people and the bodies are in the house.  If anyone else lives there, the bodies may be found.  Mr Mullins begins to fire on the Sheriff crew evicting them.  It looks like Mr & Mrs Mullins die.  In the end, we learn that they took two of the dead bodies and propped them in the house.  They escaped and the sheriff thought the bodies were them.

Mr & Mrs Mullins are determined that no one else will ever live in “their” house.  They live nearby under new identities.  The kind neighbor Ollie, who helps Ruth, is really Mrs Mullins in disguise. Mr Mullins has been going back and causing the accidents that kill everyone who moves in.  Mr Mullins shows up late at night when Ben is out of town to kill Ruth.  Ben returns early. They fight and Ben dies from his injuries.

After the funeral, the realtor who sold them the house (Vic Morrow) takes Ruth to say goodbye to Ollie.  Mr & Mrs had a fight, and Mr Mullins killed Mrs Mullins.  Mr Mullins attacks Ruth, and the realtor shoots him.

At the end, another couple buy the house from the same realtor.  Ruth is now married to the realtor.  The realtor puts on old cracked glasses, revealing he was the man with the eviction papers at the beginning.  For no clear reason, Ruth and the realtor have taken on the obsession of Mr & Mrs Mullins- killing everyone who moves into this house.  A voiceover reveals that the new buyers died in “accidents”- she fell in a well and he was hanged. 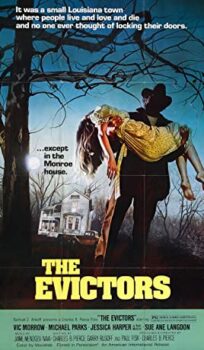