POOPER:
Barney kills Stonebanks, then escapes the collapsing building.  All of the Expendables survive, and the new recruits officially become members of the team.

LONG VERSION:
The movie opens with the Expendables pursuing a prison transport train.  The Expendables are team leader Barney Ross (Sylvester Stallone), Lee Christmas (Jason Statham), Gunner Jensen (Dolph Lundgren), and Toll Road (Randy Couture).  With Barney flying a helicopter, the rest board the train, kill the guards, and rescue a prisoner (Wesley Snipes).  But instead of escaping with the Expendables, the prisoner heads to the front of the train, kills the remaining guards and engineer, and speeds it up.  The prisoner jumps from the train onto the helicopter just as it crashes into the prison, blowing it up and killing everyone inside.  Once the helicopter lands, we learn the prisoner is a former Expendable named Doctor Death, a.k.a. Doc, who is a former medic and is very good with knives.  Now on their transport plane, Doc learns that the men on the plane are four of the last five members of the Expendables, with everyone else either dead or no longer with the team.  Barney then gives Doc his old knives back and tells him he is once again a member of the Expendables.

Instead of returning home, the team is heading to Somalia to get an arms dealer named Victor Minns.  Once there, they meets up with the last member of the team, Hale Caesar (Terry Crews), and they go after Minns.  But when they see him, Barney is shocked to see it’s actually a man named Conrad Stonebanks (Mel Gibson).  Barney, who thought he was dead, changes the plans and begins a frontal assault.  This leads to a wild chase and shootout throughout the docks and a warehouse, culminating with the team getting injured due to jumping into a river to escape a falling bomb.  All of Stonebanks’ henchmen are killed, but he gets away, but not before shooting Hale.  Now back in the US, Hale is dropped off at a hospital to tend to his life-threatening wounds.  While there, Barney is met by his old friend Trench (Arnold Schwarzenegger), who tells Barney that he will help in any way in getting Stonebanks.  As he exits the hospital, Barney meets Drummer (Harrison Ford), his new contact with the CIA, replacing Mr. Church (Bruce Willis in the first 2 films).  He didn’t know that Minns and Stonebanks were the same person, and they want him as bad as Barney does.  But with his team decimated, and one member in the hospital, what can Barney do to get him?

Barney has made up his mind that he will go after Stonebanks, but he doesn’t want to see anymore of his friends hurt or dead.  He tells the Expendables they are benched, and he goes to his friend Bonaparte (Kelsey Grammer) to help in recruiting new, and younger, members.  Together, they find four new members: Thorn (Glen Powell), a computer hacker who is also a rock climber; Luna (Ronda Rousey), a bar bouncer with close-up fighting skills; Mars (Victor Ortiz), a weapons expert; and John Smilee (Kellan Lutz), a former Marine who doesn’t care for authority but joins anyway.  They also meet Galgo (Antonio Banderas), who faked his resume and is turned away because he was kicked off his former team, even though he says that he has exceptional combat and weapons skills.  Before Barney leaves on his mission, he meets again with Drummer, who tells him that the CIA wants Stonebanks taken alive so he can be tried as a war criminal in The Hague.

Barney, Trench, and the recruits are now flying to Bucharest, Romania to spy on Stonebanks.  They learn of a new arms deal about to go down, so the team comes up with a plan to capture him.  With Stonebanks making the deal inside an art museum, Thorn will be in a nearby van taking out the security system while Barney and the rest will enter the museum and take Stonebanks.  After a long shootout, Stonebanks is captured.  As they drive to reunite with Trench at the rendezvous point, Stonebanks tells the new recruits that he was a co-founder of the Expendables, but he left after he got bored with the jobs Barney accepted, and started his own team to do the dirtier and more lucrative jobs.  The Expendables were sent to kill him and his team, but he lived due to his body armor.  At this time, Stonebanks’ men shoot a grenade at the van, blowing it up and throwing Barney into a nearby river.  The rest of the team are captured and taken by Stonebanks, knowing that Barney will return for them.

Barney and Trench return to the US, where Trench says I’m not going back.  Barney is reloading his plane for the return trip to Romania when Galgo shows up, still wanting a job.  Barney reluctantly hires him, but before they can take off, the rest of the Expendables show up.  Barney lets them on the plane, and the six of them travel to Romania.  On the flight, Barney gets a call from Drummer, telling him that Stonebanks and the hostages are now in Azmenistan, and that he and Trench will be joining them on this mission, along with another former Expendable, Yin Yang (Jet Li).  Now in Azmenistan, Barney asks Galgo why he was kicked off of his team.  Galgo says he wasn’t kicked off.  He was the only survivor of a rescue mission gone bad.

The team enters the site of a former hotel/casino, and quickly rescue the hostages.  However, Stonebanks has rigged the entire building to explode, but Thorn is able to override the signal with Gunner’s battery-powered device.  Stonebanks then sends in the Azmenistan army, and a huge battle commences.  The Expendables are able to hold their own, but they are clearly outnumbered.  Just as they appear to be overwhelmed, Drummer, Trench, and Yang arrive in an attack helicopter and begin to pick off the enemy soldiers.  With the odds evened up, the Expendables make quick work of the rest of the soldiers, but more are coming and they are running out of ammo.  Drummer then tells the team to go to the roof and he’ll pick them up.  Stonebanks, furious that an entire army can’t kill just 10 people, takes matters into his own hands and goes to the casino.  He is able to find Barney and they get into a fight.  After several minutes of fighting, Barney is able to get to a gun and kill Stonebanks.  Just then, the battery runs out, and the explosives begin to go off.  Barney races to the roof and is able to jump onto a rope hanging from the helicopter just as the building collapses.

The movie ends with the team celebrating their victory.  Thorn, Luna, Mars, Smilee, and Galgo are made official members of the Expendables, and Caesar has recovered from his wounds and has rejoined the team.  Drummer joins them in a drink, and tells Barney he will call on them again, setting up the inevitable sequel. 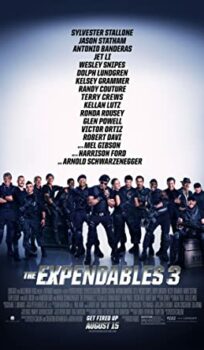