ACADEMY AWARD – Best Actor ANTHONY HOPKINS
Short pooper:
Anthony’s dementia (Anthony Hopkins) has progressed to the point that he can no longer distinguish reality from how he sees things; he hadn’t lived in his own flat for a while, but, instead, was living, first with his daughter Anne (alternately personified by Olivia Colman and Olivia Williams) and son-in-law Paul (also alternatively personified by Rufus Sewell and Mark Gatiss), and, eventually, in a nursing home, where he is seen, in the end, devastated and heartbroken at the confusion caused by his mental state, while a nurse named Catherine (also Olivia Williams) tries to comfort him.

Long version:
Throughout the film, we get and learn the perception that Anthony has progressively developed of everything surrounding him, due to the relentless advancement of his dementia. Colors, objects, and shapes seem to constantly change; he is seen having difficulty to do even menial tasks, such as putting a sweater on; he accidentally asks the same questions or says the same phrases more than once, and the people around him seem to look one way at one moment and a different way at another. For example, at separate instances, we, as the audience, see his daughter Anne personified in two different actresses: Olivia Colman (for the most part of the film), and Olivia Williams (briefly, earlier in the film, when they are discussing Anne’s marriage and she claims to be single). Same goes for Paul, Anne’s husband, who is seen mostly personified by Rufus Sewell and, briefly, by Mark Gatiss.

What is perceivable, is that we come to learn Anthony does not have a flat anymore, but, instead, has been living with Anne and Paul for a while. This has put a strain on their relationship and Paul has come to despise the old man’s sight and presence, going as far as believing it is all a trick to destroy his marriage -Paul and Anne were going to take a vacation in Italy, but it was canceled over Anthony’s issues-. Moreover, repeated attempts at getting a caregiver for Anthony fail, as he manages to repeal all prospects; however, one young, compassionate woman named Laura (Imogen Poots) succeeds and he accepts her presence, while also detailing how much she reminds him of “Lucy”, another daughter he hasn’t seen in a while -IMPORTANT LATER!-. At one point, it looks like -both versions of- Paul absconds him about “becoming a nuisance in everyone’s life” and slaps him repeatedly, but, then, it seems like he is just frightened about not having neither his watch with him -something that happened recurrently- nor the notion of time.

One night, while sleeping, a female voice calls for him repeatedly; he wakes up, apparently walks out of the room and out of the flat… but towards what seems to be a hospital hallway, and into a room, where he sees his daughter Lucy (personified, again, by Imogen Poots), lying on a bed, badly bruised as if she has been in a serious accident -which has been hinted at, a few times throughout; it is heavily implied, although never fully stated, that she died-. The next morning, he wakes up and Anne calls him to have breakfast and get ready to receive Laura. But, then, Laura arrives -personified in Olivia Williams-, which befuddles and frightens him, since “that’s not how he remembers her”, despite the woman’s reassurance that they had a good rapport the day before. He runs off to his room.

Anne comes to him and they both go over how he would be better off staying in… what turns out to be a room of a nursing home. He was no longer suitable to be without constant supervision, and Anne was actually moving to Paris -also repeatedly hinted at, all along-, only being able to come to visit him every now and then.

In the film’s final act, he wakes up and is joined by one Nurse Catherine (Olivia Williams) and, briefly, also, by Nurse Bill (Mark Gatiss) -they both appeared, respectively, as “Anne” and “Paul”, earlier in the film, a few times, as hints of what actually was his current living situation!!-. He asks about his two daughters and Catherine explains to him that Anne has been living in Paris, with Paul, for a while already, while showing him a postcard Anne recently sent. By this point, he has mentally regressed so much that his hopelessness to understand his reality causes him to break down and sob, asking for his mother and lamenting how “he is losing his leaves, his branches, the wind and the rain” -a way of expressing he felt like he was vanishing into nothing-. Catherine lovingly comforts him and offers to help him change clothes and take him to a walk in the park, as the camera pans outside and the film ends. 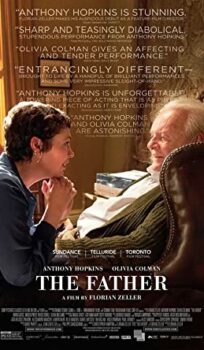