In Queen Anne’s (Olivia Colman) court, her most trusted advisor is her oldest friend Sarah (Rachel Weisz). Rachel’s cousin Abigail (Emma Stone) arrives and s reluctantly given a job by Sarah as a lowly maid.

Using her wiles, Abigail moves up from maid to a higher status, currying favor with the Queen. When she discovers Anne and Sarah are also lovers, she even becomes lovers with Anne as well. Enraged, Sarah tries to fire her, but Anne enjoys their fighting for her affections.

Abigail poisons Sarah, and while she is out of the picture, Abigail is able to further undermine Sarah by teaming up with Robert Harley (Nicholas Hoult), who has never been able to influence the Queen more than Sarah. By the time Sarah returns, she has lost her foothold, and blackmails the Queen with their love letters to banish Abigail. The Queen refuses, and Sarah is sent away. Abigail feels as though she has won, but ends up on her knees rubbing the Queen’s legs as the film ends. 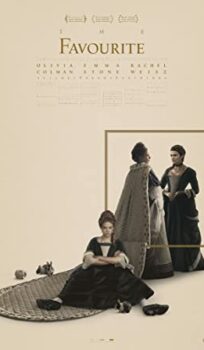