The Fish that Saved Pittsburgh(1979)

The movie features several NBA stars of the time, but no official NBA team names or logos are used in the film.

The Pittsburgh Pythons are the worst team in professional basketball.  Their home games have very low attendance, and nobody in town talks about them.  After yet another loss, the head coach quits and the entire team demands to be traded.  The only player who wants to stay is their star player, Moses Guthrie (Julius “Dr. J” Erving), who is the team’s highest paid player and hated by all of his now-former teammates.  Sensing that the team needs a miracle, the team’s ballboy Tyrone (James Bond III) looks to his hobby of astrology to see if it can be used to turn around the Pythons.  He determines that the team has the best chance of winning if all of the players have the same astrological sign as Moses, which is Pisces.  With the help of local astrologer Mona Mondieu (Stockard Channing), they go to the team’s owner H. S. Tilson (Jonathan Winters) and GM Wally Cantrell (M. Emmet Walsh) and convince them to go with the plan.

The team holds open tryouts to find a new roster and, with the help of Tyrone and Mona, select a group of unlikely players, all of whom are Pisces.  The new players include identical twins, a man who can’t speak, a free-throw shooting record holder, a Muslim prince, an aspiring rap star, and a Baptist minister (Meadowlark Lemon).  The team’s new coach (Nicholas Pryor) has trouble giving motivational speeches, so the team relies on speeches from Moses and astrological guidance from Mona.  In their first game together, the Pythons’ opponents laugh at them, but that laughter ends when the Pythons win.  The Pythons proceed to go on a long winning streak, which leads to attendance at Pythons home games to go up and everyone in town to start talking about nothing but them.  With astrology taking over everything involved with the team, H.S. officially changes the team name to the Pittsburgh Pisces.  While all of this is going on, Moses begins falling in love with Tyrone’s sister Toby (Margaret Avery).

Meanwhile, the owner’s twin Harvey Tilson (also Jonathan Winters) is trying to wrest control of the team from his brother.  He figured the best way for this to happen was for the team to continue losing, so he can buy them cheaply.  However, the team’s winning streak is ruining those plans.  With the Pisces making it to the league championship against Los Angeles, he arranges for Mona to be kidnapped prior to the game, hoping that it would cause them to lose.  Despite a grand entrance involving a hot air balloon entering the arena, the team, minus Mona’s advice, plays poorly and trails at halftime.  Mona is able to get away from the bumbling kidnappers and makes it to the arena for the second half.  Her presence allows the team to play better, and the Pisces ultimately win the game and the championship.  The movie ends with Harvey’s plans forever ruined and Moses and Toby getting together. 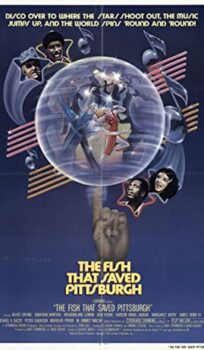