Parry (Robin Williams) is beaten up by the gang of thugs that he had earlier rescued Jack Lucas (Jeff Bridges) from. Parry is sent to the hospital, where he lapses into a seemingly irreversible coma.

Jack visits Parry in the hospital, and comes to believe that the only way to save his friend’s life is to obtain the object that Parry believed was the Holy Grail: a trophy Parry had spied inside a rich man’s home. Jack breaks into the rich man’s home, takes the trophy and brings it to Parry’s hospital bed. The “grail” works its magic. Parry wakes up from his coma,  in good health. But this time, Parry also seems to remember his deceased wife and the life they had together before her murder. His post-traumatic delusions may be going away.

Jack has been changed and humanized by his experiences with Parry. He returns to Anne (Mercedes Ruehl), the girlfriend he had dumped earlier, and professes his love for her.

At the end, a more fun-loving, free-spirited Jack is seen lying naked with Parry, under the moonlight in Central Park. 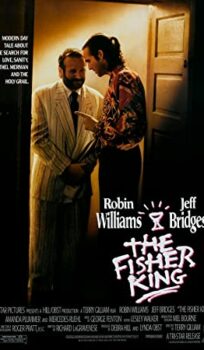