Fred (John Goodman) finally starts to hate the person he’s become after the Rubbles move out and Wilma (Elizabeth Perkins) and Pebbles leave to go to her mother’s house. He uncovers Cliff’s embezzlement scheme, but can’t do anything about it because he already signed the requisitions. Fred is forced to go into hiding as he’s now a wanted man.

At her mother’s, Wilma receives a surprise visit from Betty (Rosie O’Donnell) and Bamm-Bamm who along with Barney (Rick Moranis) are now homeless. When a news bulletin on television shows Fred as an embezzler, Wilma and Betty know that the man on tv is not Fred and they vow to clear his name. They sneak into Cliff’s office and steal the Dictabird.

Fred meanwhile has been caught by an angry mob consisting of all the quarry workers he unknowingly fired. Barney arrives and when the mob learns that he was the one responsible for Fred’s promotion, they decide to hang him too. As preparations for the lynching are made, Fred and Barney reconcile. Betty and Wilma show up to exonerate Fred and expose Cliff’s scheme with the dictabird. Reunited and reconciled, the familes return home, only to find that the house has been ransacked, Dino and Pearl tied up, and Pebbles and Bamm-Bamm missing. A ransom note demands the return of the dictabird.

At dawn, Fred and Barney return the dictabird to Cliff who reneges on his promise to release the children and activates the machine he proposed and had built earlier in the film, endangering the kids. While Fred tries to unsuccessfully shut down the machine, Barney hurries to rescue the children. Cliff tries to escape, but the dictabird escapes his clutches and returns to Fred. Cliff attempts to kill the dictabird, but is knocked out by Sharon Stone. Fred builds a catapult and uses it to destroy the machine just as Barney saves Pebbles and Bamm-Bamm. Cliff tries to escape once again, but is covered by an unknown substance created by the machine consisting of crushed rocks and water.

The police arrest Sharon, but Fred assures her that he’ll tell them what she did for him. Mr. Slate is very interested in what happened to Cliff who is now nothing more than a statue. Fred explains what happened and apologizes, but instead of being angry, Mr. Slate is enthusiastic about the invention which he names concrete. Declaring the stone age over, Mr. Slate orders all the fired workers rehired and offers Fred a presidency in the new division of the company to produce concrete, but Fred, knowing how he almost lost his family and friends because of who he became due to his promotion, turns it down, asking for for his old job back.

The movie ends in the typical fashion of the cartoon series, with the family driving out of the drive-in theater, getting a huge rib-steak from the drive-thru (complete with the car falling over), and the return home. Fred puts a bottle of milk out for the cat and puts the cat outside, but it comes back in and kicks him out of the house. The last scene before the credits involves Fred pounding on the door and screaming “Wilma!” 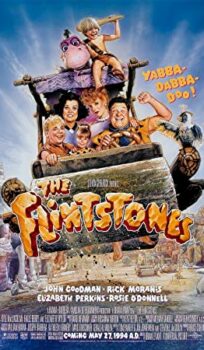