Sara (Natalie Dormer) has been told by Japanese police that her twin sister, Jess (Natalie Dormer), is missing and presumed dead since she was last seen going into the Aokigahara Forest, where people are known to go to commit suicide. Sara is convinced that Jess is alive, but in trouble, due to twin telepathy. She goes to Japan to look for her.

At her hotel, Sara meets Aiden (Taylor Kinney), a reporter, who agrees to go to the forest with her. Sara agrees to let Aiden write a story about her and she tells him the story of her parents’ death, which she explains was caused by a drunk driving accident in their driveway (although the flashback seen as she tells the story shows two dead bodies in the basement). Jess had witnessed it, but Sara closed her eyes.

At the end of their first day in The Forest, Sara sees a tent and clothes that belong to Jess. Despite protests from their guide, Michi (Yukiuoshi Ozawa), Sara insists on staying the night. Aiden agrees to stay with her.  During the night, Sara wakes up to hear rustling in the bushes. Believing it may be Jess, she follows the sound. She finds one of Jess’s Japanese students, Hoshiko (Rina Takasaki), who says that Jess knows Aiden and Sara should not trust him.

The next day, Sara’s suspicions about Aiden are raised. Aiden denies knowing Jess, but Sara finds a picture of Jess on his phone. Sara runs away from him and falls into an underground cave. She finds Hoshiko down there and discovers she is a yurei. Aiden finds her and helps her out of the cave. While hesitant, Sara agrees to walk with him again.

Aiden brings Sara to a ranger station he found while looking for her. Sara hears Jess’s voice from inside a closet and a note on the floor saying that Aiden is holding her captive. Sara kills Aiden with a small knife, only to discover that the picture, the voice, and the note were hallucinations.

The door opens to the basement of the station where Sara sees a vision of the night her parents died from Jess’s point of view. She sees that her parents did not die in a car accident, but rather a murder suicide initiated by her father. The ghost of her father grabs her wrist and she cuts his fingers away with the knife she used to kill Aiden.

Running back outside, Sara sees Jess running toward a search party. Sara chases her while calling her name, but Jess does not hear her. As Sara continues to run toward Jess, Hoshiko, stops her and stands in her way so Sara is unable to pass her. Hoshiko shows Sara her own wrist, which now has a deep cut in it. When Sara cut at her father’s fingers, she actually slit her own wrist. As she realizes this and dies of her wound, a yurei pulls her into the forest floor.

Jess is rescued by the search party. She implies that she knows Sara is dead due to twin telepathy.

At the end of the film, Michi is seen staring into the forest. It is revealed to be Sara’s spirit, which attacks him just before the credits role. 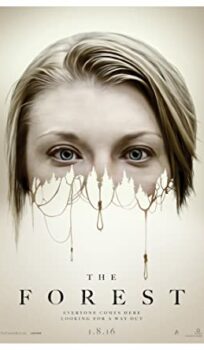