Pooper:
After bloodily removing her own modified eye, Kayla is able to escape the game.

The film ends with her tracking down and killing those in charge of the game.

Long Ending:
Kayla (Airlie Dodds) and her friend Maddie are knocked out and abducted. While semi-conscious, Kayla has visions of being in surgery. When she awakens, she finds that all her belongings have been taken (including her epilepsy medicine) and that she is in the middle of a forest. Kayla meets two other women – Alice and Sheena – who also were abducted. They explain that they are being hunted by masked killers that roam the forest. Sheena abandons them when Kayla has a seizure, worried that it will slow them down. While having her seizure, Kayla can “see” through the eyes of a black-masked killer named Rotface (and witnesses Rotface murder Alice). When she recovers, Kayla manages to run out of the forest but finds an electric fence that prevents her from escaping.

Kayla starts noticing various odd things. Each of the women has been designated a “beauty” by their captors. Rotface never pursues her and even prevents another killer – a man wearing a skinsuit made out of human flesh called SkinCrow – from killing her. Later, when attacked by a pig-masked killer named Pigface, the killer’s head explodes when SkinCrow kills another woman. Kayla also realizes that the killers are checking the faces of the women before killing them. Through her abilities to see through the killers’ eyes, Kayla learns that Maddie is also trapped in the forest, but is being kept hidden by one of the killers.

Eventually, Kayla reconnects with Sheena and another abducted woman named Rose (Linda Ngo). Kayla discovers that they all have implants in their eyeballs that their captors can use to track them and that prevents them from leaving the electric fence. She deduces that they must be part of a “game” hosted by their abductors. The women, aka the “Beauties,” are each paired up to one of the killers, aka a “Beast.” If one of the Beauties is killed, it causes the associated Beast’s head to explode (thus why Rotface, Kayla’s Beast, protected her and why Pigface’s head exploded when SkinCrow killed another woman).

Sheena decides that her best chance of surviving is to kill the other women herself (and in so doing, killing their Beasts). Kayla manages to distract Sheena long enough for Rotface to sneak up and kill her. Kayla then kills Rotface when he tries to slay Rose. The women find Maddie but are confronted by Maddie’s bird-masked Beast named Owly. Kayla has a seizure and Rose kills Maddie to make Owly’s head explode. When she recovers, a despondent Kayla insults Rose for killing her friend and the two-part ways. Kayla uses a knife to cut out her own eye – tricking the game hosts into thinking she is dead and that Rose has won. In reality, she manages to escape as the electronic fence can no longer imprison her without her eye.

The film ends with Kayla capturing and torturing one of the men running the game. She hallucinates that Maddie is still alive before killing the man and moving on to hunt down others responsible for the game. 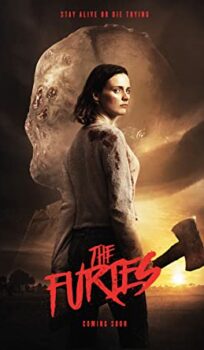