Pearson (Matthew McConaughey) was not killed at the beginning of the film, like it seemed, while on the phone with his wife Rosalind (Michelle Dockery); instead, his right-hand man Raymond (Charlie Hunnam) shot from behind and killed the Russian assassin sent to off Pearson. Also, up-and-comer gangster Dry Eye (Henry Goulding) has his boss Lord George (Tom Wu) killed, as a step to eventually get to Pearson’s marijuana empire; then, with two goons -which she shoots and kills with the “paperweight” golden Derringer gun-, he tries to kidnap and (when that fails) rape Rosalind, just to be shot dead by Pearson himself, who had run off to try to save her upon realizing what was going on.

All along, Dry Eye and Matthew Berger (Jeremy Strong), the eccentric billionaire Pearson intended to sell his empire to, were in cahoots, as it was confirmed by sleazy Private Eye Fletcher (Hugh Grant), who has been relaying the entire story to Raymond throughout the film, in the style of a hopeful screenplay that -he thinks- could become a successful movie deal. Berger wanted Pearson’s operation disrupted, so that he could talk Pearson out of the expected $400 million price. However, Pearson, thanks to the dirt gained on Berger, gets the upper hand and, after showing him the frozen corpse of Dry Eye, punishes him by forcing him to transfer Pearson a compensation of $270 million -the difference between the original 400 and the 170 Berger was determined to pay, instead- while locked inside a freezer, before dying of hypothermia, as well as making him “cut a pound of his own flesh” for knowing about Rosalind’s attempted rape.

Meanwhile, “Coach” (Colin Farrell) and his trainees have also intervened in the whole matter by kidnapping the tabloid editor Big Dave (Eddie Marsan), drugging him and filming him doing bestiality with a pig; then, they blackmail him into backing away or the video gets posted online. When Fletcher returns to Raymond, demanding a payout for the silence of having tailed both him and Pearson, Raymond reveals that he, in turn, tailed Fletcher all throughout as well, for insurance, with Coach’s guys having stolen his evidence. While this is revealed, Fletcher also confesses that the Russians would ambush and kill Pearson for the death, earlier, of Aslan (Danny Griffin), the kid who was thrown off the balcony; but Coach and his gang gun down the Russians while Pearson escapes unharmed.

In the end, Fletcher tries to pitch the whole story to Miramax. Upon leaving, he boards a taxi that happens to be driven by Raymond, who was sent to capture him. Raymond informs Pearson, who, having decided to keep his empire, rejoices with the news and celebrates with Rosalind. 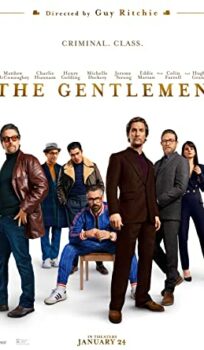