Notorious hacker Lisbeth Salander (Claire Foy) is called upon by a former NSA developer named Frans Balder (Stephen Merchant) to retrieve a program he created called Firefall, which can access the world’s nuclear launch codes. After Lisbeth hacks into the NSA’s systems to get Firefall, she is attacked by a trio of men led by Jan Holtser from a group called “The Spiders”, and they take Firefall from her. Lisbeth then reteams with journalist Mikael Blomkvist (Sverrir Gudnason) to find out who the Spiders are and why they want Firefall. Also looking for Firefall is American NSA security expert Edwin Needham, who goes out to Sweden for his mission.

Holtser kills Balder and tries to take his son August, but Lisbeth saves August and keeps him protected since she knows that he can unlock Firefall. However, they are found by Camilla (Sylvia Hoeks), Lisbeth’s estranged sister. She is the mastermind behind the Spiders, a group previously headed by their criminal father Alexander Zalachenko, and Camilla has been continuing his work long after his death. They kidnap August to try and get him to unlock Firefall, which they succeed in doing. However, Lisbeth gets help from Needham and another associate named Plague to help kill Camilla’s henchmen. Lisbeth chases after Camilla as they end up at the edge of a cliff. Camilla repents for her misdeeds and commits suicide by jumping off the cliff.

Lisbeth wipes all of Firefall so that nobody can have it, to Needham’s dismay. She later burns down her and Camilla’s old home so that no memory of her father’s legacy may live on. 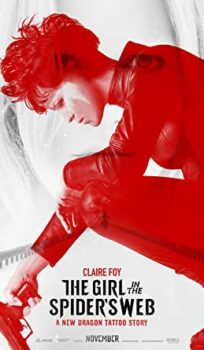